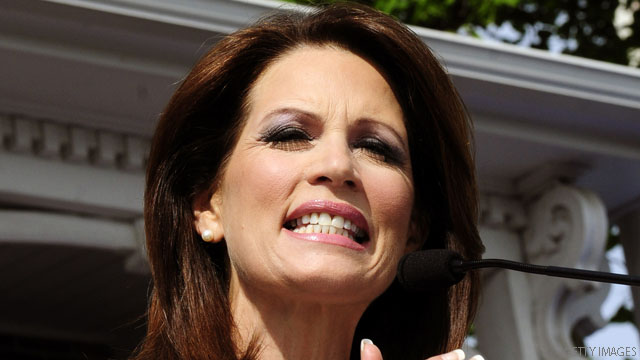 (CNN) - After repeated attacks on her record from Republican presidential rival and fellow Minnesotan Tim Pawlenty, Michele Bachmann hit back Sunday, vehemently contrasting her record in Congress with his as governor.

Bachmann said that while she was working against excessive spending, cap and trade, TARP and the individual health care mandate, Pawlenty was praising the same plans and leaving his state with a budget crisis.

"Executive experience is not an asset if it simply means bigger government and more intrusive government," Bachmann wrote in a statement. "Actions speak louder than words."

Ahead of the high stakes Ames straw poll in Iowa, Pawlenty has criticized Bachmann, who is leading recent polls in the first-in-the-nation caucus state, over her record in Congress, which he said consists of giving speeches and offering "failed amendments in Congress."

In an interview with CNN Chief Political Correspondent Candy Crowley Friday, Pawlenty said he doubted the American people would elect a president who lacked executive experience.

"These are really serious times and there hasn't been somebody who went [directly] from the U.S. House of Representatives to the presidency, I think, in over a hundred years, and there's a reason for that," Pawlenty said.

When asked by CNN about the not-so-veiled jab Saturday, Bachmann didn't attack Pawlenty, and instead said she is very proud of her record of service in Washington and Minnesota.

"What I have focused on is going against the agenda of growing big government in Washington. I've been very effective," Bachmann said. "I've brought the voice of the people that I serve in Minnesota to the halls of Congress."

But Sunday's statement was different. She took on Pawlenty by name and issue, even comparing him to President Barack Obama.

"Governor Pawlenty said in 2006, 'The era of small government is over … the government has to be more proactive and more aggressive.' That's the same philosophy that, under President Obama, has brought us record deficits, massive unemployment, and an unconstitutional health-care plan," Bachmann said. "Real-world actions speak louder than the words of career politicians."

"The truth is that there is very little difference between Governor Pawlenty and Congresswoman Bachmann on their issue positions," Conant said. "The difference is that when Governor Pawlenty was scoring conservative victories to cut spending, pass market-based health care reform, and transform a supreme court from liberal to conservative, and was elected twice in a very blue state, Congresswoman Bachmann was giving speeches and offering failed amendments, all while struggling mightily to hold onto the most Republican house seat in the state."