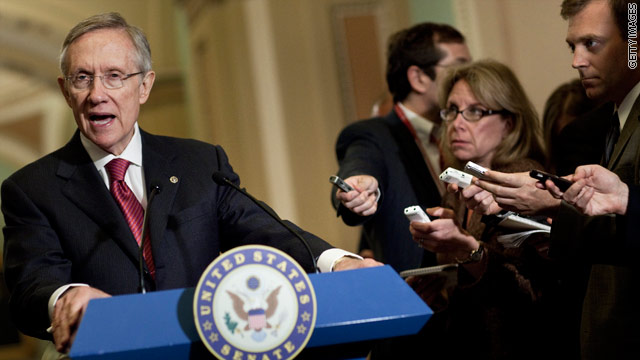 Facing impasse, Reid to offer his own plan

Washington (CNN) - A Senate Democratic aide tells CNN that “despite multiple offers from our side, the speaker has so far been unwilling to agree to any form of a two-step solution that President Obama would sign.”

And while talks continue, the aide said, Senate Majority Leader Harry Reid, D-Nevada, is “working on a proposal of at least $2.5 trillion in debt reduction” and may inform his caucus about that plan Sunday night.

Democrats believe the proposal meets GOP requirements that the debt ceiling be increased with dollar for dollar spending cuts. The aide would not describe what spending cuts would be included in the package, but it’s about $1 trillion higher than the spending cuts identified in the talks led by Vice President Joe Biden.

The proposal would not include any increase in revenues and would raise the debt ceiling until 2013.