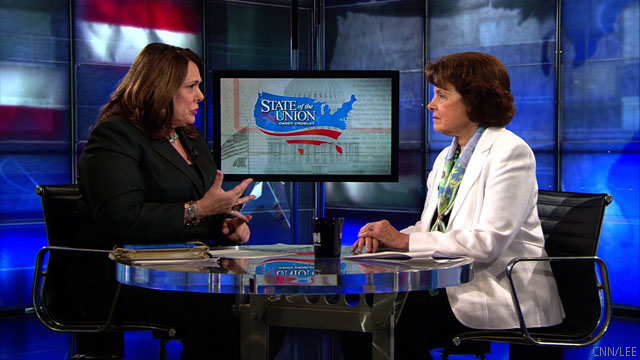 Washington (CNN) - Making her case for the repeal of the Defense of Marriage Act, Sen. Dianne Feinstein said Sunday that Americans are now more open to homosexuality.

"As time goes on, what I find is more and more people have gay friends, they have gay relatives," Feinstein said on CNN's "State of the Union." "People are much more forward with their thinking about this now. I think they're much more open to it."

Click to watch video
Last week Feinstein introduced the Respect for Marriage Act, which would undo the 1996 law that bars same-sex couples from receiving federal benefits. The California Democrat said the provisions of DOMA, signed into law by former President Bill Clinton, are wrong and unconstitutional. States that allow same-sex marriage should offer the same benefits to homosexual couples that they do for heterosexual couples, including Social Security survivor benefits and the ability to file joint tax returns, she said.

"If a state says, 'Yes we're going to countenance same-sex marriage,' then all the rights and benefits thereof ought to be due to that relationship," Feinstein said.

Feinstein is a former San Francisco mayor who assumed office after the 1978 slayings of her predecessor, George Moscone, and City Supervisor Harvey Milk - the first openly gay public official in the United States.

She said the plight of the repeal legislation "may be a long march," but that it would be a successful one. Yet, the legislation is unlikely to pass without Republican support, despite a recent bump from President Obama's public support for the act's repeal.

Feinstein's comments come on the first day of same-sex marriages in New York following the state law passed in June. New York is the sixth state to pass such a law. Most states ban same-sex marriage, including California, which voted on the issue in 2008.

Although a slight majority of voters now think gay marriage should be legally recognized, significant party divides still exist on the issue, according to a national survey.

A CNN/ORC poll released in April showed 51 percent of registered voters think same sex marriage should be valid. However, while 64 percent of Democrats and 55 percent of independents think it should be legal, only 27 percent of Republicans said the same.