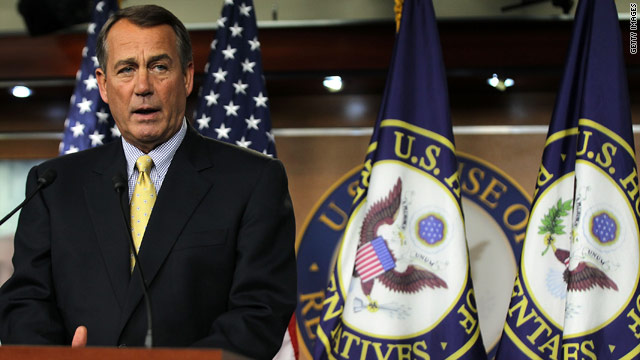 Washington (CNN) - With both sides still at an impasse on a debt deal to raise the nation's debt limit by Aug. 2, House Speaker John Boehner is moving forward with a new House GOP plan that would aim for roughly $3 trillion in cuts and raise the debt ceiling in two stages.

According to two senior House GOP aides, the new legislation would initially cut $1.2 trillion in discretionary spending through cuts in government programs and caps on spending over the next 10 years. If these caps aren't reached, the plan would force across the board spending cuts. If Congress exceeds caps on spending, cuts will be triggered across the board.

These cuts would be paired with an increase to raise the debt ceiling by $1 trillion, which aides expect would allow the Treasury to continue borrowing through February or March of 2012.

Any change to the proposed spending caps would require a vote by Congress.

The House Republican plan also sets up a 12 member bipartisan "joint committee for deficit reduction" which would be given broad authority and instructed to come up with $1.6 to $1.8 trillion in additional savings. It would be given a deadline of Nov. 23rd to report back its findings and if the committee's recommendations were approved by a simple majority vote, their report would go to both the House and Senate to vote on by Dec. 23.

The committee could include entitlement reforms, tax reforms, and further discretionary spending cuts to reach its deficit reduction target. If the committee's report passes both chambers the debt ceiling would be raised again, by approximately $1.6 trillion. Congress could vote to disapprove of the request, similar to a key element of the plan that Senate Republican Leader Mitch McConnell proposed, but the President could veto any resolution of disapproval, and still raise the debt limit. If the committee’s plan fails to pass both houses, debt limit would not be raised.

In addition, the bill includes a requirement that both the House and Senate vote on a balanced budget amendment by the end of the year. It doesn't require that the amendment pass both Houses, as the GOP "cut, cap, and balance" plan did, just that both chambers vote on one.

Asked about the prospects for this plan in the Senate, one senior Republican aide said, "we believe that this is a very credible proposal that the Senate will have a very hard time rejecting."

While Speaker Boehner is moving ahead with this bill – and is still aiming for a vote on it this Wednesday – Senate Democratic Leader Harry Reid is unveiling his own plan that would raise the debt ceiling through the end of 2012 and cut spending by $2.7 trillion over ten years.

While the GOP aides outlining the House plan didn't have all the details on Reid's proposal they threw cold water on the Senate Democratic plan. "I don't think it has much of a chance to pass the Senate," one aide told reporters.

But with House Democrats unlikely to give the new Boehner plan much support since it doesn't raise the debt ceiling through the end of 2012, these GOP sources declined to say whether Boehner could muster the votes to pass the plan with just Republicans.