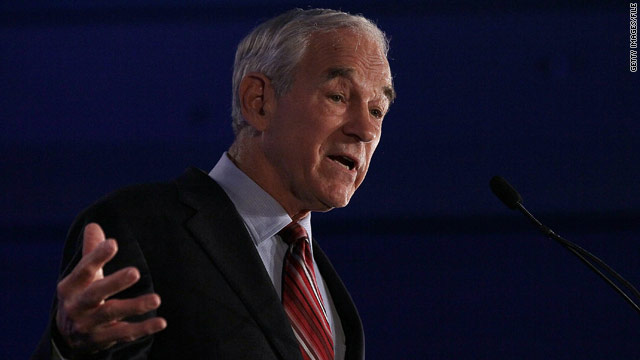 Cory Adams - the Republican chairman of Story County in Iowa – endorsed the Texas congressman's presidential bid at a campaign event in Ames, Iowa.

That's significant for a few reasons. Ames is the largest city in Story County, home to over 50,000 residents. And it is in this city that a widely-watched showdown between the GOP presidential candidates will play out on August 13. The Ames Straw Poll will test the candidates' popularity and could be a sign of their electability.

Having the endorsement of such an influential political figure in and around Ames will surely give Paul's campaign something to boast about as it aims for a strong showing in that contest.

Adams explained to CNN the rationale behind his endorsement of Paul.

"I try to go for the candidates that line up mostly with the values, the principles of the [nation's] founders," Adams said. "Out of all the candidates in this cycle, I found Ron Paul to be the one with the longest, most consistent voting record to back up those principles and concepts."

Adams explained: "Back in 2008 there were a lot of people within the Republican Party that kind of disregarded Congressman Paul. And basically didn't just count him in and/or wouldn't even mention him. So when you can have a county chair who is part of the Republican Party, part of the establishment and support him, it gives him more credibility within the party and brings him back from the fringe."

Adams explained that some voters previously labeled Paul "a whack job, fringe candidate" – and that his and other endorsements from mainstream Iowa Republicans could help change that.

At the same event, Iowa State Rep. Jason Schultz also spoke about his support for Paul.

Though the endorsements are positive for Paul's campaign, it's unclear just how far they'll go. Despite a passionate and loyal group of supporters – often very visible and vocal at Paul campaign stops - the candidate has trailed fellow GOP contenders Former Minnesota Governor Tim Pawlenty, Minnesota Rep. Michele Bachmann, and at times others, in some Iowa polls. In some other polls, Paul has fared better against Pawlenty.

During his speech, the candidate talked about his chances in the Ames contest.

Citing growing enthusiasm for his message, Paul said: "There's more enthusiasm with the people that are true believers. And like I said…Ames lends itself to that. I wish I could say that I am the frontrunner and nobody is ahead of me and it's a shoe-in. But the truth is, we can do it and will do very, very well and hopefully come in first."

"But I'll tell you what – I'll challenge any other candidate for the enthusiasm of our supporters."