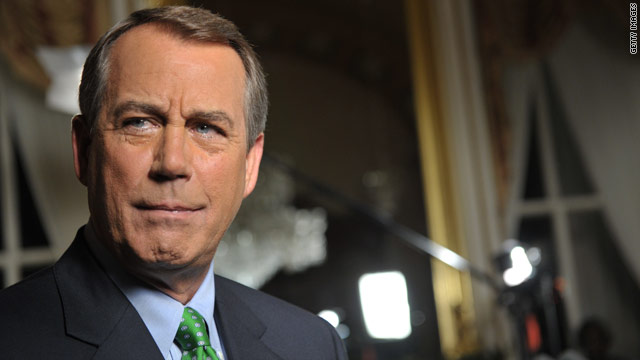 Washington (CNN) - As House Speaker John Boehner and the House Republican leadership continues to build support for its proposal to raise the debt ceiling, several influential tea party and conservative groups Tuesday voiced opposition to it.

House GOP leaders are working the conservative members of their caucus to try and get enough support to reach the 217 votes needed to pass the Speaker's plan in a vote scheduled for Thursday. That proposal would couple $1.2 trillion in savings over a decade with a hike of just under $1 trillion in the debt limit that would extend it through the end of the year. It also calls for the formation of a congressional committee to find $1.8 trillion in deficit savings, and if that is enacted the debt limit would increase by $1.6 trillion.

"I do think that we're going to have some work to do to get it passed, but I think we can do it," Boehner told reporters Tuesday.

Many of these conservative groups and members only would support increasing the ceiling if it is accompanied by larger spending cuts as well as enactment of a balanced budget amendment while some others flatly oppose any hike.

Club for Growth, a national network of activists who promote economic growth and low taxes, announced Tuesday it was opposing the Speaker's plan. The group strongly backed the bill passed last week by the House that would have cut and then capped federal spending and pushed a balanced budget amendment.

"The Club for Growth strongly opposes the Boehner Debt Limit plan," Club for Growth President Chris Chocola said in a statement. "It cuts almost nothing immediately, it caps only discretionary spending, and it does not require passage of a balanced budget amendment. Additionally, and perhaps more importantly, it simply doesn't fix the country's fiscal problems. We strongly oppose it, and we urge a no vote."

It said a congressman's vote on this debt bill will be a key part of its legislative scorecard.

The group said it thinks the elements of "Cut, Cap and Balance" "absolutely must be an intrinsic part of any plan to raise the debt ceiling, or it will not have the support of the tea party movement," Tea Party Express spokesman Levi Russell told CNN. He said the group is activating its members to attend the rally, and if they can't they should call their lawmakers.

"We've been saying we don't want a deal, we want a solution!" Russell said.

Another group, Tea Party Patriots, opposes any increase in the debt ceiling.

"Our local coordinators by 95% reject the proposal Speaker Boehner currently has on the table. It does not seriously address the overspending problems our government faces," Jenny Beth Martin, the co-founder and national coordinator for the group, told CNN. She said her group also has been urging its members to call Capitol Hill with the message: "Enough is enough. The American people will no longer stand for promises of the future. We demand real cuts and real action now!"

To try to assuage conservatives' concern, Boehner again called Rush Limbaugh's show on Tuesday saying Republicans won't give President Obama a blank check for spending and will not raise taxes as part of any deficit deal.

"It cuts $2.5 trillion from the discretionary portion of the budget over the next ten years, and puts spending caps in place that will make sure that that savings actually does, in fact, occur … [B]ecause the greatest risk to our country is not missing August the 2nd, the greatest risk is that we do not make the cuts necessary to put our financial house in order."

Seventy-four percent of tea party supporters would favor raising the debt ceiling if a balanced budget amendment were passed by both houses of Congress and substantial spending cuts and caps on future spending were approved. Seventy- four percent of tea party supporters also said in the same poll that they would oppose raising the ceiling several times in the next 18 months while cutting a smaller amount in government spending and not raising taxes.