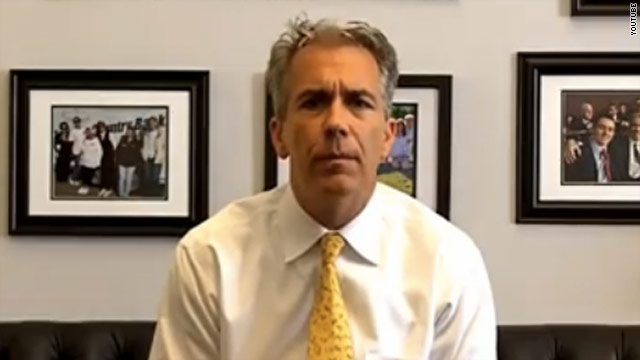 Walsh blames President Obama for bringing the country to the brink. But he is also candid that he and other Republicans will be partly to blame if the nation goes into default.

Click to watch video
"If we do default it will be all of our faults," Walsh said in an interview with CNN. On Tuesday, Walsh's office said the congressman opposes Speaker Boehner's plan to reduce the deficit.

Like many of his fellow GOP upstarts, Walsh is vehemently opposed to the President's agenda. Walsh posted a video on his House website that accused the President of misleading senior citizens about the possibility that Social Security checks could be delayed if the U.S. hits the debt ceiling.

It's that kind of rhetoric that has veterans of past budget battles in Washington bracing for the worst. Alice Rivlin, a former member of President Obama's debt commission, believes the tea partiers in the GOP House are out to "frustrate" the president at every turn.

"I have never seen anything like this. I think it's very scary and very embarrassing for our system of government," Rivlin told CNN.

A former budget director under President Clinton, Rivlin did not hide her disappointment in Mr. Obama for walking away from the recommendations of his own debt commission.

"I think everybody missed an opportunity, both the President and the leadership of the Congress," Rivlin said.

That's in part because Congressional leaders are doing more listening than leading. Each side is being forced to answer to its base. So far, House Republicans have succeeded in blocking tax increases from the current debt deals on the table. And Democrats, for the moment, have saved Medicare and Medicaid from drastic cuts.

U.S. Rep. Raul Grijalva, D-Arizona, a prominent member of the House Progressive Caucus, believes the White House is operating with the assumption Democrats will line up behind the President to support any deal.

"I think there's been an understanding that we have nowhere else to go. But I think that's a miscalculation by the White House," Grijalva said.

Democrats have at times created their own political sideshows.

Earlier this month, U.S. Rep. Sheila Jackson Lee, D-Texas, a longtime member of the Congressional Black Caucus, took to the House floor to question whether Republicans are sticking it to the President because of his race.

"Why is he different? And in my community that is the question that we raise," the congresswoman said.

In an interview with CNN, she defended her comments.

Or perhaps it's simple political gamesmanship.

Centrist Democrats and Republicans, the forces for compromise in any Congress, were in greater supply under President Bush. These days, moderate lawmakers are nearly extinct on Capitol Hill. Arkansas Democratic Rep. Mike Ross, a fiscally conservative "Blue Dog" Democrat, announced Monday he is stepping down.

Republicans cheered his retirement and predicted he won't be the last.

Adding to the polarization in Congress are special interest groups standing on the sidelines of the debt ceiling debate.

On Tuesday, the tea party organizer FreedomWorks joined a pro-business group, the Club for Growth in opposing the Boehner plan.

MoveOn.org also came out against the Speaker's proposal and warned Democratic lawmakers not to touch it. "We're watching," a MoveOn email stated.