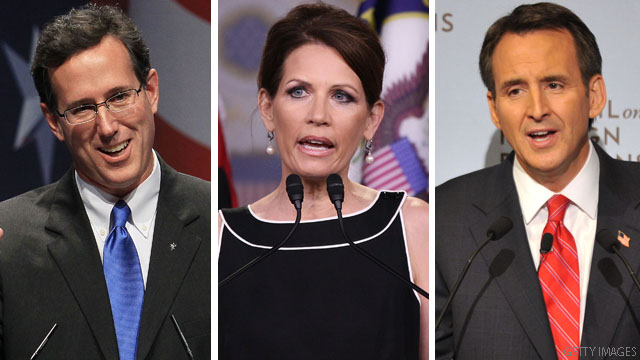 (CNN) – Through critical statements, Republican presidential candidates capitalized on the president's address Monday night that laid out his course for how find an agreement to raise the debt ceiling before the August 2 deadline.

Rep. Michele Bachmann of Minnesota, who has used her opposition to an increase in the debt limit as a cornerstone of her campaign efforts, accused President Obama of using "political gamesmanship" with the national crisis.

"Shame on President Obama for casting the American people aside as collateral damage, as he continues his political gamesmanship with the national debt crisis," Bachmann said in a statement.

Bachmann said Americans don't want the "balanced" approach the president called for and instead said spending cuts are needed to "put our nation on the path to prosperity."

Former Minnesota Gov. Tim Pawlenty said Obama is "lecturing the country instead of leading it" and failed to offer real solutions to fix the problem Monday night.

"Tonight's speech was all rhetoric and no results, and is another reason why President Obama needs to be removed from office," Pawlenty said in a statement.

"President Obama said tonight that 'people are fed up with a town where compromise has become a dirty word,' but what the people are fed up with is a President who uses class warfare as a crutch to divide rather than focusing on solving the issues affecting each and every American," Santorum said in a statement.