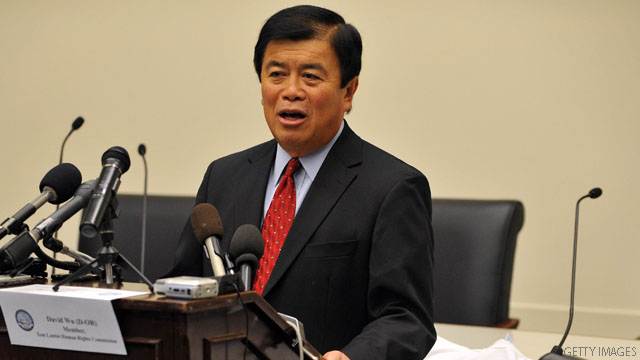 Washington (CNN) - Oregon Rep. David Wu's resignation announcement Tuesday has most likely provided relief to national Democrats worried about holding onto what should be considered a safe seat.

The seven term Democratic congressman said that he will resign from the House of Representatives after being accused of making unwanted sexual advances toward a fundraiser's daughter. In a statement issued by his office, Wu said he would step down once the current standoff between Congress and the White House over raising the U.S. debt ceiling is resolved.

Rep. Steve Israel, the chairman of the Democratic Congressional Campaign Committee, said in a statement soon after Wu's announcement that "Congressman Wu's resignation is the right decision."

Israel went out to point out that his party has long dominated elections in Oregon's first congressional district, saying that "a Democrat has held this seat in Congress since 1975, Senator John Kerry won this district in 2004 and President Obama won this district with 63 percent in 2008.

"We are confident that a Democrat will continue to represent the families in this overwhelmingly Democratic district."

Wu won each of his re-elections by double digits. The district includes parts of metropolitan Portland and areas west and northwest of the city.

A GOP source tells CNN that "this should be slam dunk for Democrats. The only shot Republicans had was to have Wu in the race."

In his statement Tuesday Wu said that "I cannot care for my family the way I wish while serving in Congress and fighting these very serious allegations. The well-being of my children must come before anything else."

The 56-year-old congressman, who separated from his wife in 2009, disclosed in February that he had sought "professional medical care" after dealing with campaign stress, his responsibilities as a single father and his own father's death. The Oregonian reported that campaign aides had confronted him about his erratic behavior and use of medication during his 2010 re-election bid.

"I fully acknowledge that I could have dealt with these difficult circumstances better, and I remain focused on being a good father to my children and a strong representative for the people of Oregon," he said at the time.

After word of the latest incident was reported Friday, House Democratic leader Nancy Pelosi urged an ethics investigation. With calls for his resignation mounting back home, Wu's spokesman said Monday that the congressman would not seek re-election and was "considering all options" regarding the rest of his term.

Oregon is not gaining, or losing, any House seats, due to the results of the 2010 census, so unlike former Democratic Rep. Anthony Weiner's district in New York State, there is no chance of Wu's district disappearing during redistricting.