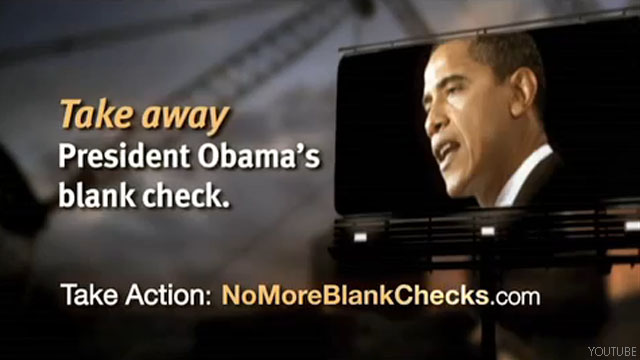 WASHINGTON (CNN) - The GOP-leaning independent group Crossroads GPS is stepping up its attacks on the Obama administration. Wednesday it launches the newest ad in its $20 million media campaign criticizing the president's economic policies, CNN has learned.

The group says it is spending $3.5 million on this new advertisement, which is set to air on national cable TV in the key swing states of Iowa, Colorado, New Mexico, Nevada, North Carolina and Virginia.

The ad paints a bleak picture of the country's fiscal future, saying "America's economy is hanging by a thread" thanks to "reckless spending, a failed stimulus and a $14 trillion debt. We are near the breaking point."

The ad ends "It is time to take away President Obama's blank check."

Steven Law, president of Crossroads GPS, says the group is running the ads because "Republicans must stop President Obama's reckless scheme to raise taxes in the middle of a jobs recession," apparently referring to the president's desire to bring in more revenue as part of any package to increase the debt ceiling. He accuses the president of holding "our country's fiscal stability hostage."

Crossroads' ad campaign does not address the bills pending in Congress to raise the debt ceiling.

The group has separately run a series of ads this month on economic issues, including one that started Tuesday aimed at Democratic Senators in key electoral states. Each ad targets a specific politician saying that "instead of fixing our economy" he or she voted for "billions in new taxes and racked up trillions in debt in crushing debt."

Crossroads GPS and its affiliate American Crossroads, major players among the new crop of independent expenditure committees, spent $70 million in the 2010 midterm elections backing GOP candidates and causes and has pledged to raise $120 million for the 2012 cycle.

These ads are part of a major effort on all sides of the deficit issue to sway public opinion.

Two Democratic-aligned groups, Patriot Majority and Americans United for Change, as well as the Service Employees International Union, also are up with ads on the debt-ceiling battle that take on Republican lawmakers.

The Democratic National Committee issued a response to the latest Crossroads ad, criticizing Republican plans to raise the debt ceiling, including the "cut, cap, and balance" pledge.

"Republicans are embracing duck, dodge and dismantle plan which will hurt our economic recover," the statement says. "[The] largest portion of long term debt caused by tax cuts for the rich and wars in Iraq and Afghanistan, not by Obama or the recovery."