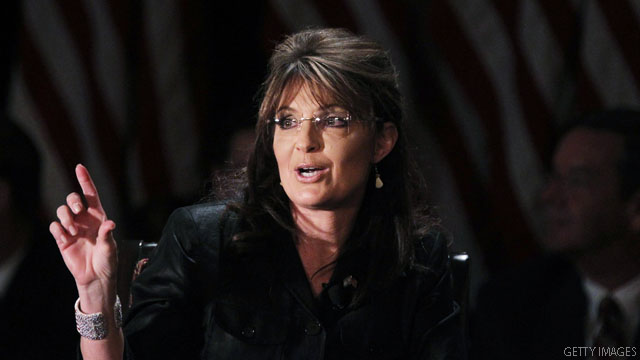 (CNN) – Sarah Palin accused President Obama of "scaring" the American people over the importance of raising the debt ceiling before the August 2 deadline.

"Scaring the American people is exactly what President Obama is doing," Palin said Tuesday night on Fox News. "The president's getting pretty good at this fear mongering and trying to cram down the public's throat this idea of bigger government, more spending."

Although the former Alaska governor and 2008 Republican vice presidential nominee said she respects House Speak John Boehner's efforts to negotiate with the president, she said there is a larger problem with his strategy.

"The internal problem that he has is reinventing the wheel here in the 11th hour, when we already have Cut, Cap and Balance that passed the House, and we don't need to retreat now and wave a white flag," Palin said.

The Republican-controlled House passed "Cut, Cap, and Balance," a plan that failed to pass the Democratic-controlled Senate last week. The pledge includes cuts and caps in spending and a balanced budget amendment to the constitution. Boehner is now trying to put forward a plan that includes the framework of the pledge in a deal that could become law. Obama is advocating for a "balanced approach" to the crisis that would combine spending cuts and no extension of Bush-era tax cuts for families making more than $250,000 a year.

Palin, who is considering a bid for the White House in 2012, has said raising the debt ceiling is inevitable, but that Republicans "better get something out of it."

"This August 2 deadline is looming, but it's not Armageddon, it's not life-or-death, so Boehner and the Republicans have got to make sure that they've got a good plan in front of those who will be voting on this plan," Palin said.