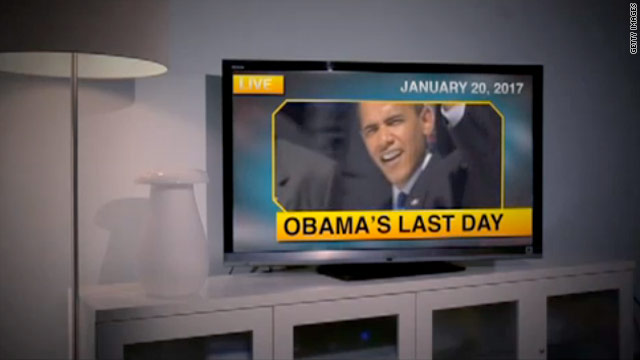 Washington (CNN) - The Republican National Committee released its final attack ad of a month-long campaign against President Obama, according to the group, hitting the president over his handling of the economy.

The latest 30-second spot shows a young girl watching television on the last day of the Obama administration, in 2017. She is watching hypothetical news broadcasts that report the unemployment rate and U.S. debt to China climbing to record levels.

"Eight years ago, we were promised hope," the narrator says. "Today many believe their American dream has been lost."

The RNC said the ad will air in Florida, Virginia, North Carolina, Indiana, Ohio and Iowa, all battleground states in 2012 that the president won in 2008. A Spanish radio ad will accompany the television buy in Florida.

"These are states Obama carried in 2008 that he must hold in 2012," RNC Chairman Reince Priebus said in a statement. "The risk of continuing Barack Obama's failed stewardship of our economy is too great. The American people know it's time to change direction."

The RNC would not say how much money it's spending to air the commercials or how long they will run.