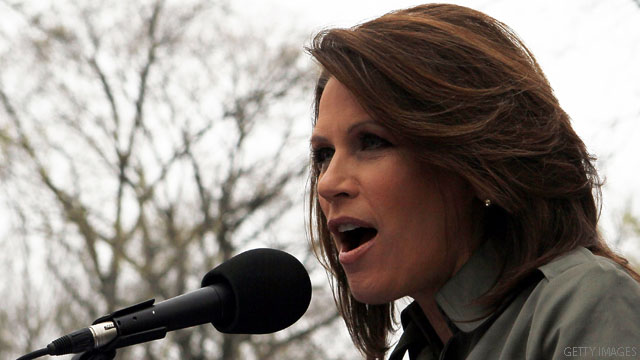 (CNN) - Republican presidential candidate Michele Bachmann said President Obama would be a "dictator" if he raised the debt ceiling by executive order, using the 14th amendment of the U.S. Constitution as justification.

"It's Congress that does the spending. The president is prohibited to do that. If he had the power to do that he would effectively be a dictator," the Minnesota Congresswoman said Thursday on CNN's "American Morning." "There would be no reason for Congress to even come to Washington, D.C. He would be making the spending decisions … Clearly that's unconstitutional."

Click to watch video
With the looming August 2 deadline and no agreement reached to raise the debt ceiling, some have suggested the president sign an executive order to raise the borrowing limit without Congressional approval. A section of the 14th amendment states "the validity of the public debt of the United States … shall not be questioned."

Bachmann also leveled increased criticism on the president, giving him a "big 'f' on his economic report card."

"What President Obama has failed to do is properly understand the issues. On every measure this president has failed," Bachmann said.