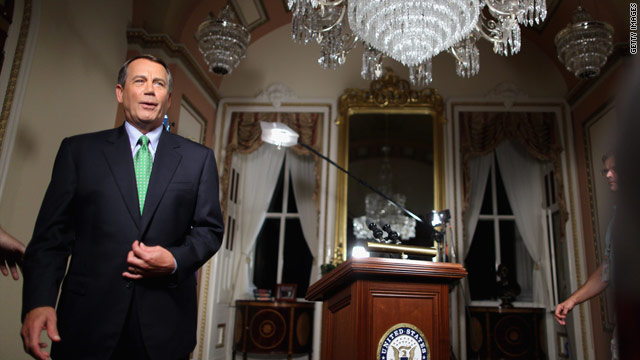 As part of that lobbying effort, House GOP leaders agreed to add a last minute sweetener for conservatives who have been pushing for a balanced budget amendment to ensure future spending cuts actually happen.

House Republicans plan to have a pair of votes Friday on two versions of a balanced budget amendment to the Constitution. One version, if adopted by the states, would require that the government maintain a balanced budget. The other version, one that conservatives have long been pushing, would also require a supermajority vote in both chambers to approve any tax increases.

Indiana Republican Mike Pence said while he prefers the stricter version, he recognizes it's unlikely to get enough votes to pass both the House and the Senate, so he pressed for adding a vote on the other version. An amendment to the Constitution needs a two-thirds majority in both chambers to pass.

When leaders agreed to the second vote, Pence told reporters, "That inked the deal for me." He flipped from undecided to a yes.

The vote is expected Thursday evening on Boehner's plan. One House GOP aide sounded confident their bill would pass and put the onus on Senate Democrats.

"By the end of the day, the House will have passed two debt limit increases and sent them over to the Senate." the aide told CNN, adding, "The House will have done its job, and Harry Reid and the President will now have three choices on how they wish to move forward – Cut, Cap and Balance, the Boehner compromise, or to go past the August 2nd deadline and risk default and the economic ramifications that come with it."