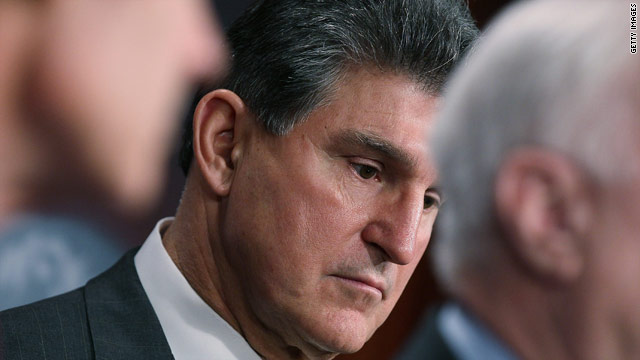 Washington (CNN)–Democratic Sen. Joe Manchin vowed he would not vote for the Republican, plan to raise the nation's debt ceiling Thursday. But he won't vote for the Democratic-backed plan either.

"Washington may be broken, but it will not break me," he said in a speech on the Senate floor.

"And you should not let it break you, either," Manchin chided President Barack Obama.

The first-term senator, who was voted into office during a special election after veteran West Virginia Sen. Robert Byrd's death, is the only Democrat in the Senate to withhold his vote from either plan.

"I came here to fix things, not to make things worse," he said.

Standing by a promise that he wouldn't vote to raise the amount of money the nation can borrow "without a long-term fix," Manchin said he viewed the plan put forth by Senate Majority Leader Reid as a short-term fix. And House Speaker John Bohener's proposal? A shorter-term fix.

"In my estimation, neither of the two plans …that are currently proposed by Republican or Democratic leadership comes close to preventing our nation from being downgraded or actually solving the debt crisis we face," he said.

Manchin, a former governor of West Virginia, criticized the plan put forth by his own party leader because it "doesn't make sense."

It's like, "saying that we will save money we haven't even budgeted," Manchin argued.

And the Boehner plan "kicks the can down the road to 2012," he claimed.

For those reasons, Sen. Manchin will not back either deal because, "I can't support a short-term deal that is just a little better than the shorter-term deal."

Democratic House members of the Congressional Black Caucus have also pledged to vote "no" on both bills, believing the fiscal and debt debates should not be linked together. Instead, they would like to see the debt limit raised with nothing attached.

CNN's Paul Steinhauser and Lisa Desjardins contributed to this report.