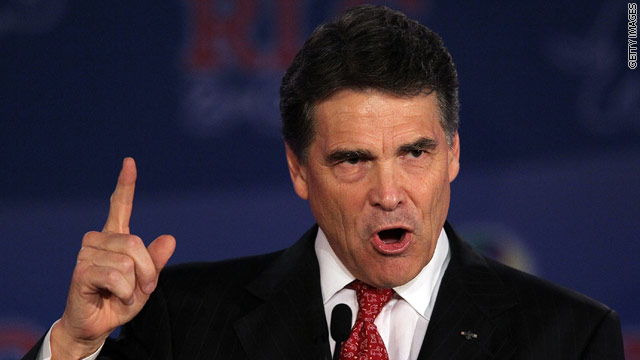 Texas Gov. Perry: 'Gay marriage is not fine with me'

In an interview with Family Research Council President Tony Perkins he hedged controversial comments made at a dinner in Aspen last week when he said, "Our friends in New York six weeks ago passed a statute that said marriage can be between two people of the same sex. You know what? That's New York, and that's their business, and that's fine with me."

"I probably needed to add a few words after that 'it's fine with me,'" Perry admitted to Perkins Thursday.

And he repeated his commitment to the 10th amendment as well as his conviction that marriage should be between a man and a woman. "It's fine with me that a state is using their sovereign rights to decide an issue. Obviously gay marriage is not fine with me. My stance hasn't changed."

"My comments reflect my recognition that marriage and most issues of the family have historically been decided by the people at the state and local level. And that is absolutely the state of law under our Constitution," Perry continued.

The former Pennsylvania senator quickly slammed Perry on Twitter Saturday saying, "So Gov Perry, if a state wanted to allow polygamy or if they chose to deny heterosexuals the right to marry, would that be OK too?"

But almost a week later, the three-term governor sought to pacify his critics as he voiced support for a federal marriage amendment similar to the statewide amendment in Texas passed during his administration that defines marriage as a union between one man and one woman.

"To not pass the federal marriage amendment would impinge on Texas and other states not to have marriage forced upon them," Perry said.

"Our Constitution was designed to respect states…I have long supported the appointment of judges who respect the Constitution and the passage of a federal marriage amendment. That amendment defines marriage as between one man and one woman and it protects the states from being told otherwise," he affirmed.