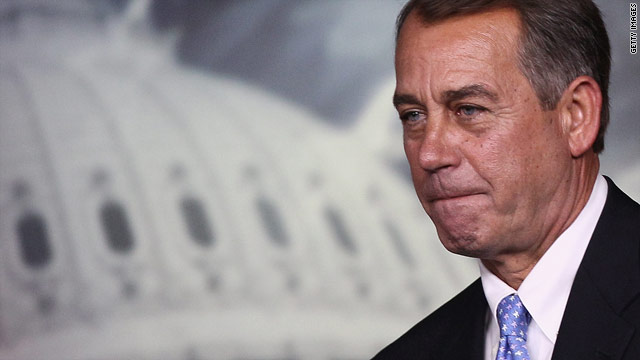 Washington (CNN) - House Speaker John Boehner told Republicans during a closed door meeting that he "woke up happy this morning," according to Rep. Steven LaTourette, R-Ohio, who spoke to reporters after the meeting.

Boehner told GOP members "he loves some less than others today, but he loves us all," LaTourette said.

The Speaker's comments came as he and other top GOP leaders scrambled to make a change to their debt ceiling bill to get rebellious conservatives on board.  They were forced to pull the planned vote on the bill Thursday night after failing to round up enough support.  House Democrats have pledged a united front against the GOP plan.

After late night discussions on Thursday with conservative Republicans opposed or undecided on the measure, GOP leaders agreed to tweak the bill's language dealing with the balanced budget amendment.  To address concerns on the right flank about ensuring future spending cuts actually happen, the revised version of the bill would require that the second increase in the debt limit early next year be contingent on congressional passage of a balanced budget amendment.  The bill originally just mandated that a vote happen, not that it pass.

New Jersey Republican Scott Garrett, who was opposed, told reporters he could now support the bill, and predicted the bill would now pass because of the change.

House Majority Leader Eric Cantor, asked if leaders now had sufficient votes to pass their debt bill, said, "I think we do."

Speaker Boehner, according to a Republican who attended Friday's closed door meeting, told members, "'If we pass this today, we will have sent not one, but two bills to the Senate that would end this crisis,"' referring to the "cut, cap and balance" legislation the Senate rejected last week.

"'All that will stand between the American people and a resolution to this crisis will be the Senate, which has passed nothing,"' Boehner said, according to that Republican source.