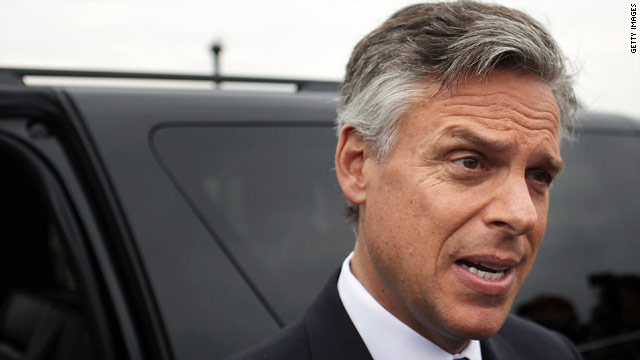 Huntsman's advice on the debt ceiling: 'Use the bully pulpit'

The contender for the 2012 GOP nomination for president told CNN's "The Situation Room" anchor Wolf Blitzer that if it were up to him, he'd use the "bully pulpit" as president "in ways that speak to clear, cut, and defined goals that the people of this country want to achieve."

"The one thing that's missing in this whole debate is presidential leadership," Huntsman said Friday. He defined action as, "Using the weight and the power of the presidency to define in specific terms where this whole debt ceiling issue goes."

The former U.S. ambassador to China asserted, "We're the most significant financial services country in the world" that needs to meet "our obligations."

And he called debt a "cancer in this country," that needs to be "radiated," "excised," and "cut out."

"First and foremost there's got to be serious cuts associated with whatever we do with the debt ceiling," Huntsman said.

And if he were in Obama's seat, Huntsman stated he'd, "Use the bully pulpit for things other than DNC talking points...Get very specific about where you want to take this debate, and then you got to work both Houses of Congress."

And for Huntsman, who has been polling in low single digits of support, extending the debt ceiling until 2012 is a political ploy. Because he believes the country "needs this debate," Huntsman affirmed it is healthy for dialogue to continue during the 2012 election cycle.

"I think that's not a bad thing at all for the people to be part of continuing deliberation about the most important policy issue of our time," he said.