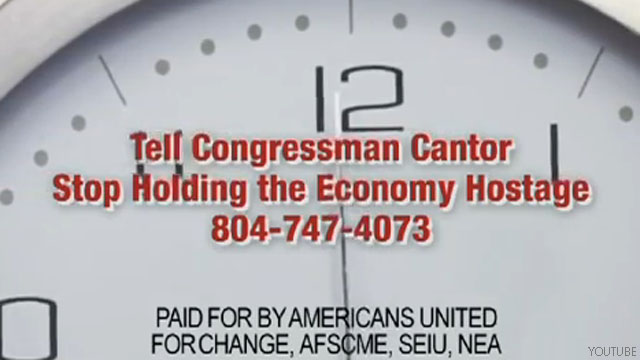 Washington (CNN) - A bunch of progressive groups and unions are joining forces to go up with a television commercial in eight states that implores congressional Republicans not to push the nation into default.

Americans United for Change, the Service Employees International Union, the American Federation of State, County, and Municipal Employees, and the National Education Association say they're spending six figures to run the ad Friday through Monday.

"If Congress doesn't act by Tuesday, American won't be able to pay all of its bills. Social Security checks, veterans benefits, military – all could be at risk because ____ and Congressional Republicans want to protect tax breaks for millionaires, oil companies and corporate jets," says the narrator in the commercial. "So if the check you or your family depends on doesn't arrive, thank _____."

This is the second round of ads by progressive groups that take on GOP lawmakers over the debt ceiling standoff. Americans United for Change teamed up with SEIU last week in a commercial that targeted four other congressional Republicans.

Earlier this week a powerful independent group that backs Republican candidates and causes went up on the airwaves with a new ad over the debt ceiling debate criticizing five Democratic senators who face challenging re-elections next year. Crossroads GPS (Grassroots Policy Strategy) announced Tuesday that their television commercials would run through August 6 in Florida, Missouri, Montana, Nebraska and Ohio.

The ads take on Senators Bill Nelson, Claire McCaskill, Jon Tester, Ben Nelson and Sherrod Brown, saying that "instead of fixing our economy, politicians like ___ voted for billions in new taxes and racked up trillions in debt in crushing debt. Now President Obama wants to continue the reckless spending and raise taxes even higher. And that costs us more jobs. Tell Senator ___ no more blank checks."

The following day the group said it went up with a new commercial on national cable TV in the key presidential election battleground states of Iowa, Colorado, New Mexico, Nevada, North Carolina and Virginia. The ad ends by saying "It is time to take away President Obama's blank check."

Crossroads says their latest commercials are part of a $20 million effort this summer to "urge decisive action by Congress to cut spending and the national debt and start rebuilding the nation's economy."

Crossroads GPS and its affiliated American Crossroads spent $70 million in the 2010 midterm elections backing GOP candidates and causes, and has pledged to raise $120 million for the 2012 cycle.