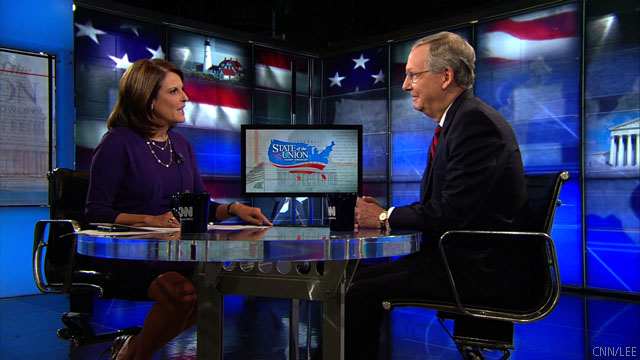 Appearing on CNN's "State of the Union," the Kentucky senator said Republicans and Democrats "made dramatic progress" Saturday over a $3 trillion package of spending cuts that would not include tax increases.

Click to watch video
McConnell said he is "very very close to being able … to recommend to my members that this is something that they ought to support."

Although all the details are not yet agreed upon, McConnell said the deal would likely be a two-step process. The first step would include an immediate increase in the borrowing limit, a vote in the Senate on a balanced budget amendment and a new bipartisan committee to recommend more cuts. The joint committee would make recommendations for further deficit reductions and changes to entitlement programs by Thanksgiving. But McConnell would not comment on what specific "triggers" would serve as penalties if the committee did not reach an agreement. The second step would allow Congress to disapprove of Obama raising the debt ceiling further.

"You'll see that this is a process that could get him (President Obama) past the election. We're working on the combinations that will get us there," McConnell said. "I'm particularly appreciative that we're now back talking to the only person in America who can sign something into law and that's the president of the United States."

A Republican source close to the negotiations told CNN the goal is $3 trillion in savings, and that the deal would include a $2.4 trillion increase in the debt ceiling.