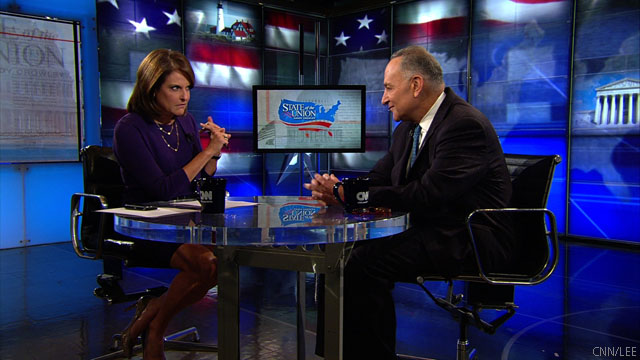 Washington (CNN) - Sen. Chuck Schumer said Sunday there is no final agreement on a deal to raise the debt ceiling, but described a mood of "relief" on Capitol Hill.

"If there's a word right here that would sum up the mood, it would be relief, relief that we won't default," the No. 3 Democrat in the Senate said on CNN's "State of the Union." "That's not a certainty but default is far less of a possibility now than it was even a day ago."

Click to watch video
Schumer said the proposal under discussion would include an initial round of spending cuts and set up a special congressional committee to recommend additional deficit reduction steps. At the same time, the debt ceiling would be increased in two stages.

Democrats and Republicans are still debating a mechanism that would trigger automatic across-the-board budget cuts if Congress fails to pass the additional deficit reduction steps recommended by the bipartisan special committee, according to Schumer.

"If they don't, the pain inflicted is so great, they have an incentive to come to an agreement," Schumer said. "If the sword is tough enough and sharp enough the likelihood of agreement increases."