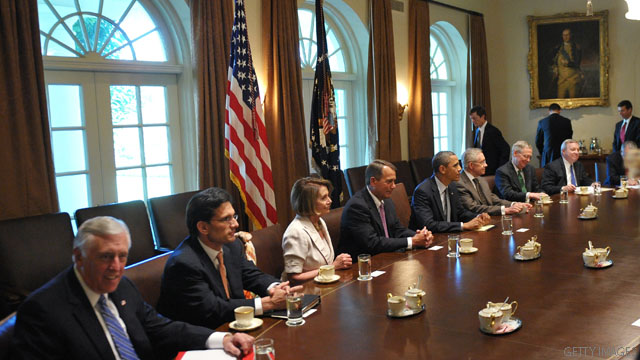 2012 candidates sound off on debt deal

(CNN) – Varied reactions to the debt deal are coming from Republican presidential candidates following Sunday's agreement between the White House and Congressional leaders to raise the nation's debt ceiling before the August 2 deadline.

Former Massachusetts Gov. Mitt Romney, who kept his distance from the debate ahead of the agreement, said as president his plan "would have produced a budget that was cut, capped and balanced," that did not leave the door open to higher taxes and cuts to defense spending.

"President Obama's leadership failure has pushed the economy to the brink at the eleventh hour and the 59th minute," Romney said in a statement. "I personally cannot support this deal."

Rep. Michele Bachmann of Minnesota, who has consistently opposed an increase to the debt limit, said President Obama "failed to lead and failed to provide a plan."

"The 'deal' he announced spends too much and doesn't cut enough," Bachmann said in a statement. "This isn't the deal the American people 'preferred' either, Mr. President. Someone has to say no. I will."

Jon Huntsman, the former Utah gov. and U.S. ambassador to China, disagreed with his 2012 rivals, calling the agreement a "positive step toward cutting our nation's crippling debt."

He encouraged members of Congress to vote for the agreement and said he will advocate for a plan from the bipartisan committee that includes "real cuts, entitlement reform, and revenue-neutral tax reforms – without any tax hikes."

"The Republican members of Congress deserve tremendous credit for moving this debate to the forefront and at long last beginning to get Washington in line," Huntsman said in a statement.

Former House Speaker Newt Gingrich responded to the deal by outlining his approach to solving the debt crisis that would include a concentration on job creation, keeping politics out of national security and cutting spending by reforming and restructuring government.

"With so much work remaining to be done, this deal is yet another reminder of the urgent need to replace President Obama and his radical commitment to big government and higher taxes," Gingrich said in a statement.

Alex Conant, a spokesman for former Minnesota Gov. Tim Pawlenty, said the deal is "nothing to celebrate."

"Only in Washington would the political class think it's a victory when the government narrowly avoids default, agrees to go further into debt, and does little to reform a spending system that cannot be sustained by our children and grandchildren," Conant said in a statement. "While no further evidence was needed, this entire debt ceiling fiasco demonstrates that President Obama must be replaced."