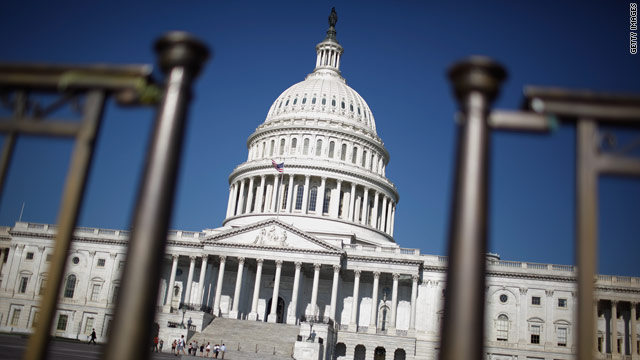 (CNN) - A majority of Americans disapprove of the deal struck Sunday by President Barack Obama and congressional leaders that will raise the country's legal borrowing limit, and three out of four believe elected officials have acted like "spoiled children."

According to a CNN/ORC International poll conducted Monday during a House of Representatives vote on the legislation, 52 percent of Americans say they are opposed to the debt ceiling deal while 44 percent are in favor of it. The Senate passed the legislation Tuesday in a 74-26 vote.

The spending cuts in the agreement were the only popular part of the bill, winning support from two-thirds of the public.

Seventy-seven percent of respondents said elected officials who have dealt with the debt ceiling have acted like spoiled children. Just 17 percent believe the politicians have acted like responsible adults.

So who won the debate over the debt ceiling?

"When three-quarters say that elected officials are behaving like spoiled children, it's probably safe to say that there are no winners," Holland said.

READ MORE: How They Voted

The poll was conducted on Monday night, with interviews done both before and after the vote on the bill in the House of Representatives. "Some were unaffected by the House vote and none reflect the Senate's actions on Tuesday," Holland noted. "Final passage of the bill - particularly if it is by big margins - may affect public attitudes towards the debt ceiling agreement, since Americans tend to like a winner. The poll shows how Americans felt on Monday night, not how they will feel next November - or even next Monday, for that matter."

The CNN poll was conducted by ORC International on August 1, with 860 adult Americans were questioned by telephone. The survey's overall sampling error is plus or minus 3.5 percentage points. The poll was conducted both before and after the House of Representatives vote on the issue on Monday night.