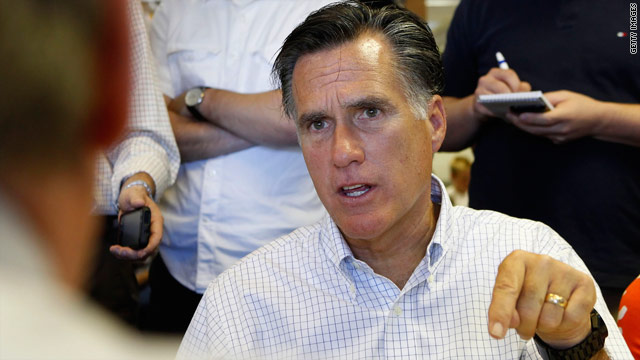 Washington (CNN) - It was roughly nine hours before the voting began in the U.S. House of Representatives on raising the debt ceiling when a message from Mitt Romney hit the in-boxes of political reporters across the country.

"I personally cannot support this deal," the statement read.

The Republican presidential front-runner had taken a stand on the agreement reached to increase the debt limit. The problem was, conservatives said, Romney was one of the last GOP contenders to do so.

Matt Lewis, a blogger with the conservative website The Daily Caller, posted an image of Romney's face on a milk carton. Above the face of the former governor was the glaring caption: "Missing Leadership."

In Politico, Ben Smith wondered whether Romney had entered the "Mittness Protection Program."

One of Romney's rivals, a noticeably more aggressive Jon Huntsman, was also milking the issue. He all but asked: "Got Mitt?"

"To dodge the debate, or to wait until the debate is over, effectively, and to take a side, I don't consider that to be leadership," Huntsman said.

The Romney campaign has said for weeks the GOP contender favored a bill, dubbed "cut, cap and balance," that tied a debt ceiling increase to steep spending reductions and a balanced budget amendment.

But critics cried that was not a clear position on whether to raise the debt ceiling.

Another GOP contender, Minnesota Congresswoman Michele Bachmann, took a stand in her first TV ad nearly a month ago.

"I will not vote to increase the debt ceiling," Bachmann said in the ad.

But flying below the radar might pay off in the long run. Note the latest Quinnipiac poll in Pennsylvania, a Democratic firewall state, where Romney is beating President Barack Obama by a slim 44-42 margin.

"Washington, D.C., right now is like political quicksand for 2012 political candidates. If you get involved it's going to be hard for you to climb out of it," Bonjean said.

But Romney's unrelenting conservative critics complain the front-runner's lack of clarity on the issue is another installment of "Malleable Mitt," a candidate who insisted at a CNN debate in June the president had made the economy worse.

"What this president has done has slowed the economy. He didn't create the recession, but he made it worse and longer," Romney said at the debate.

He appeared to contradict himself later that month. "I didn't say that things were worse. What I said was, the economy hasn't turned around," Romney said at a campaign stop in Allentown, Pennsylvania.

Romney is ramping up his campaign in August, with a slew of stops planned in Iowa and New Hampshire. Voters in those states will have plenty of opportunities to try to pin him down.