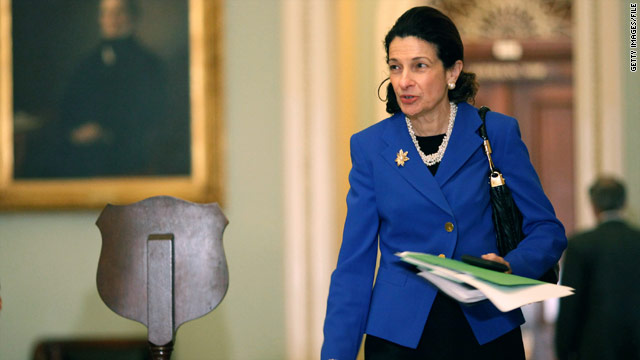 (CNN) - It's been three hours and Sen. Olympia Snowe, R-Maine, is already getting hammered from the right over her vote to increase the debt ceiling.

Scott D'Amboise, a conservative Republican who's vying for Snowe's Senate seat, e-mailed his supporters Tuesday accusing the moderate three-term senator of having "lied to us."

"Just 25 days ago, Republican Sen. Olympia Snowe told us she would vote for a debt plan with a balanced budget amendment," D'Amboise writes in the fundraising letter. "However, today Snowe betrayed us by voting with the Democrats for a debt deal that gives President Obama a blank check in exchange for only token spending cuts and no promise for a balanced budget amendment."

Snowe and South Carolina Sen. Jim DeMint co-authored an editorial in the Wall Street Journal last month calling for a balanced budget amendment to be included in a debt ceiling deal. Forty-five other senators signed on to their call.

But Snowe voted on Tuesday to raise the debt ceiling, approving a bill that did not include a balanced budget amendment. Snowe was the last senator to vote on the deal and was seen huddling with Arizona Sen. Jon Kyl, the Republican whip, and other Republicans before voting aye.

While Snowe is clearly on record in support of a constitutional amendment that would require Congress to balance its budget, she's never said that she would not vote for a bill without such an amendment attached.

"She either lied or willingly mis-held how she was going to vote," Harber told CNN.

Snowe, a figure in Maine politics for more than 30 years, has more than $2.7 million of cash in the bank as of her June 30 filing with the Federal Election Commission. D'Amboise, who announced his candidacy earlier this year, has just $111,000.