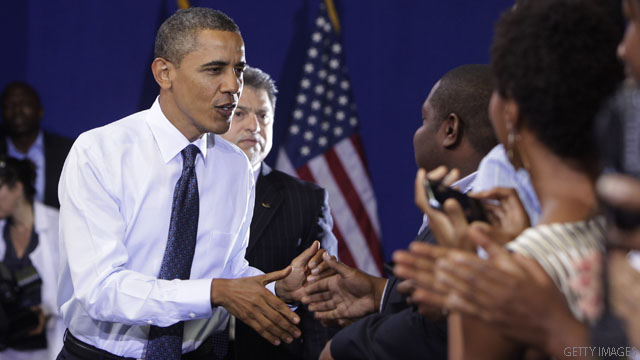 One thousand five hundred people are expected at the historic Aragon Ballroom Wednesday night, according to Katie Hogan, deputy press secretary for Obama's re-election campaign. Attendees paid a minimum of $50 per ticket, which will flow to the Obama Victory Fund, a joint account with the Democratic National Committee and the Obama re-election campaign.

Entertainment for the event, on the eve of the president's 50th birthday, will include rock band OK Go, Jennifer Hudson and Herbie Hancock.

The president will attend a 100-person dinner before the larger event. Individuals spent up to $35,800 for a ticket, $5,000 of which will go to the Obama campaign. The remainder of the funds will go to the DNC.

Prior to the fundraisers, the president will hold video teleconferences in 1,100 birthday house parties across the country set to last between 10 and 15 minutes. In addition, top Democrats and campaign officials will host seven "surrogate fundraisers" throughout the country, according to Hogan.

Wednesday's events are the first held by the president during the third fundraising quarter. His last event on June 30th was in Philadelphia.

Republicans jumped on the string of events, accusing the president of playing politics amid rough economic times.

In a conference call with reporters, RNC Chairman Reince Priebus said the president's leadership has been nonexistent, "unless of course it's taking the initiative to raise campaign cash."

"The fundraiser in chief is back in Chicago doing the one thing that he's really good at and that's raising money to save his job," Priebus said according to a transcript provided by the RNC.

The White House announced a Midwest bus tour on Wednesday to refocus the president's attention on the U.S. economy, one day after he signed legislation to raise the nation's debt ceiling.

- CNN's Alexander Mooney and Kevin Bohn contributed to this report.