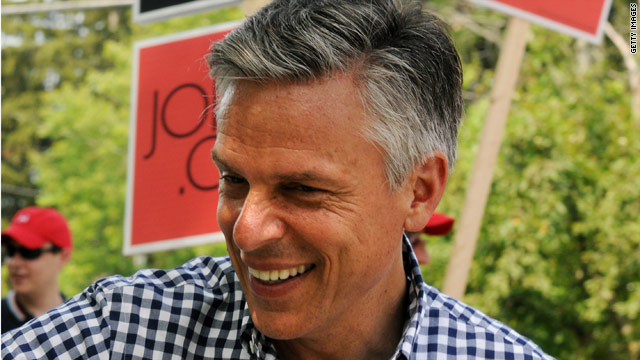 Huntsman rocks out to 'Charlie Brown'

Manchester, New Hampshire (CNN) - Former Utah Gov. Jon Huntsman highlighted his musical background on a jaunt through downtown Manchester Wednesday, greeting voters as part of a ramped-up effort by his campaign to gain ground in this must-win state.

Huntsman was persuaded to play a keyboard while visiting a music store on the city's historic thoroughfare. The politician, who dropped out of high school to join a band, couldn't resist and bent over the keys to play the Charlie Brown theme song.

"No, I'm not going to play," he protested, even as he fiddled with the keyboard's settings.

Huntsman, a former ambassador to China who entered the presidential race in late June and has struggled to make waves in the polls, seemed to expect voters not to know his name.

"I'm running for president. Huntsman's the name. Take a look," he repeated over and over, carefully enunciating his last name. "Huntsman."

He is spending a week in the state courting local officials and speaking to GOP groups. During his tour Wednesday he was careful to frequently thank Manchester Mayor Ted Gatsas, a Republican who has yet to support a candidate and who arranged the outing.

"The mayor's taking us around and introducing us to people on Main Street," he told a patron at a pizza shop. "You can't do better than that."

The mayor - who's offered the tour to any candidate who asks - concurred.

"It's a little easier when the mayor breaks the ice," Gatsas said. "I think [Huntsman] did well. I think he met a lot of people."

One of the few candidates to support the debt deal in Washington this week, Huntsman explained his grudging approval of the deal to several voters.

"I think that everyone's really upset," he said. "And because they're really upset they probably found the right balance."

Still, he blamed Obama for not showing enough leadership to get a deal done sooner, and said entitlements and a balanced budget amendment should be on the table in the future.

"There has been nothing in the last two and a half years that has spoken to the most important issue of our time, and that's expanding the economy and creating jobs," he said.

A teacher eating lunch asked Huntsman about his education policy and got a detailed response that included adding charter schools and an emphasis on early childhood education.

Steve Lebel, a Democrat and a third grade teacher who had not heard of Huntsman, was impressed with the response.

"I definitely would go to his website and check out more of what he has to say about education because I feel that that's kind of gone by the wayside," Lebel said.

The former governor ended the tour with a couple of corny jokes at a Ben and Jerry's ice cream store.

"Is Ben here?" he asked the two young women scooping the cones, who giggled and told him no. "What about Jerry?"

As for flavor - the man who sees himself as a rocker at heart could only make one choice: a cherry, chocolate-y flavor named after Jerry Garcia.

"I've got the Grateful Dead running through my head as I eat 'Cherry Garcia,'" Huntsman said.