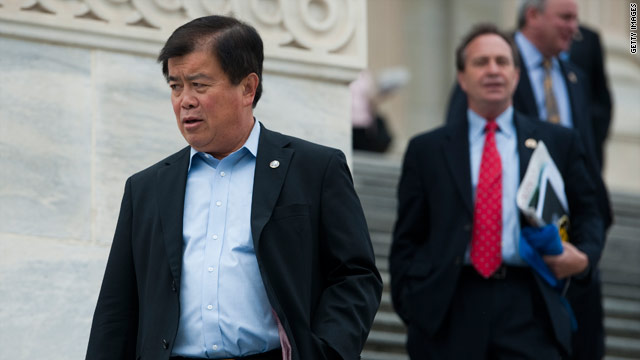 (CNN) - The resignation of Democratic Rep. David Wu of Oregon officially went into effect at 11:59 p.m. ET Wednesday night. He stepped down after he was accused of making unwanted sexual advances toward a fundraiser's daughter.

Wu announced last week he would resign but postponed his formal resignation until after the House voted on the debt-ceiling bill Monday.

"Serving as a U.S. Congressman has been the greatest honor of my life," Wu said in his handwritten letter to the governor. "There is no other job where you get up each day and ask, 'How can I try to make the world a better place today?'"

Last month, Portland newspaper The Oregonian reported that the daughter of one of Wu's fundraisers accused him of unwanted sexual advances in May.

Citing anonymous sources from inside the congressman's office, The Oregonian said the woman, whom it declined to name, left a voice mail message at Wu's Portland office alleging aggressive advances.

According to the newspaper, the woman was 18 when the alleged incident took place in November and it was never reported to police.

With House Democratic leader Nancy Pelosi seeking an ethics investigation after that news and calls for his resignation mounting back home, the congressman's spokesman said last week that he would not seek re-election and was "considering all options" regarding the rest of his term.

A day later, Wu announced he would step down.

"I cannot care for my family the way I wish while serving in Congress and fighting these very serious allegations," Wu said then. "The well-being of my children must come before anything else."

The 56-year-old congressman, who separated from his wife in 2009, disclosed in February that he had sought "professional medical care" after dealing with campaign stress, his responsibilities as a single father and his father's death. The Oregonian reported that campaign aides had confronted him about his erratic behavior and use of medication during his 2010 re-election bid.

"I fully acknowledge that I could have dealt with these difficult circumstances better, and I remain focused on being a good father to my children and a strong representative for the people of Oregon," he said at the time.

Wu's Portland-area district is heavily Democratic, and he won each of his races by double-digit margins.

Rep. Steve Israel, the chairman of the Democratic Congressional Campaign Committee, said his party has long dominated elections in Oregon's first congressional district, adding that "a Democrat has held this seat in Congress since 1975, Senator John Kerry won this district in 2004 and President Obama won this district with 63 percent in 2008.

"We are confident that a Democrat will continue to represent the families in this overwhelmingly Democratic district."

Kitzhaber has said he will call for a special election.

Republican businessman Rob Cornilles said he will announce his candidacy for the vacant seat Thursday. He ran unsuccessfully against Wu last year.

"While deliberating this very important decision with my family, I was constantly thinking of the amazing people that gave their time and energy last year," he said. "I thought of the people that gave up their Saturday mornings to walk in parades, the people that came in and made phone calls after work and on the weekend, and everyone that made a contribution to our campaign in their own special way."