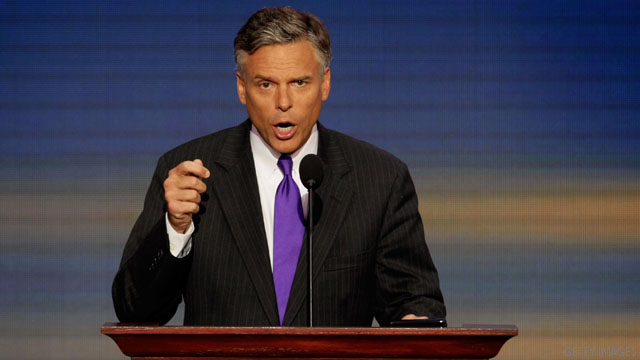 Salem, New Hampshire (CNN) - Republican presidential candidate Jon Huntsman defended his chief strategist and said his 2012 effort is now on the right track, after a former consultant said the campaign was riven with infighting and misdirection.

"We've got our campaign up and running," the former Utah governor told a group of reporters Thursday. "It is retooled. It is firing on all cylinders. And we're preparing to win here in New Hampshire."

Huntsman's remarks come after a major shake up at his campaign headquarters and a messy tell-all article in Politico, the political news web site. Former Huntsman confidante David Fischer told the news outlet the campaign's strategist John Weaver was verbally abusive to staffers and was mismanaging the race.

Weaver worked for Sen. John McCain's presidential campaign in 2007 but was pushed out of his role before the senator won the GOP nomination.

"John Weaver is a critically important part of our team," he said. "He's a great friend and he's indispensable."

He refused to answer repeated questions about his relationship with Fischer, only saying: "Let's just say this campaign is moving in the right direction."

Fischer withdrew from the campaign in July.

The candidate chuckled but would not respond to a question about whether he would appear on ABC's news talk show "The View" anytime soon. The Politico article quoted Fischer saying Huntsman's wife thought the candidate should already have appeared on the show.

CNN obtained a memo the Huntsman campaign e-mailed to donors Tuesday outlining the campaign's restructuring and promising a fleeter, more aggressive effort that would draw contrasts with his "very weak" field of Republican opponents.