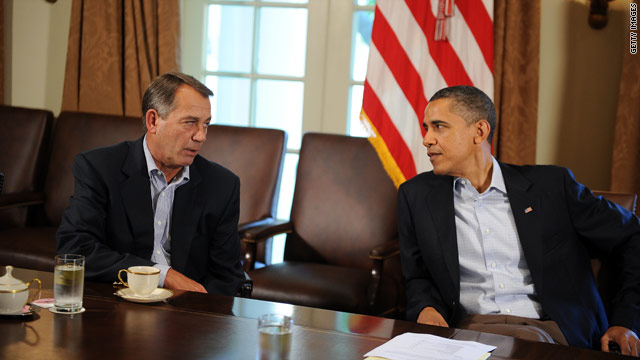 Poll: No one wins in debt ceiling deal

(CNN) – No one has emerged spotless from the debt-ceiling debate, according to a survey conducted in the aftermath of the agreement to raise the nation's debt ceiling.

A CBS News/New York Times poll released Thursday revealed that eight in 10 Americans say they disapprove of how Congress is handling its job – the highest number in the poll's history since 1977.

A CNN/ORC International poll released Tuesday echoes the nation's displeasure with congressional leaders. Eighty-four percent of the nation disapproved of the way Congress is handling its job in the poll; only 14 percent approved.

But the country is split over how the president is handling his responsibilities in the White House. Forty-eight percent said they approve of how President Barack Obama is handling his job and 47 percent disapprove in the CBS News/New York Times survey.

The nation may be split over how it views the president's role in debt negotiations – almost half both approve and disapprove of how he handled the talks – but it's clear most agree that all of the players were more interested in gaining an upper hand.

Eight in 10 believe the debt disagreement was mostly about gaining political advantage while a minority – 14 percent – say it was about doing what's best for the country.

Republicans are also more to blame for the budget standoff in the survey – 47 to 29 percent – over the president and Democrats in Congress.

The poll indicates that it's difficult for everyone to be pleased with the debt-ceiling deal. The country is split with the outcome since 46 percent approve of the agreement and 45 percent disapprove.

Looking to the future, congressional members may be spending some time at home smoothing ruffled feathers: 75 percent of the country feels that most members of Congress do not deserve to be re-elected and 15 percent say they do.