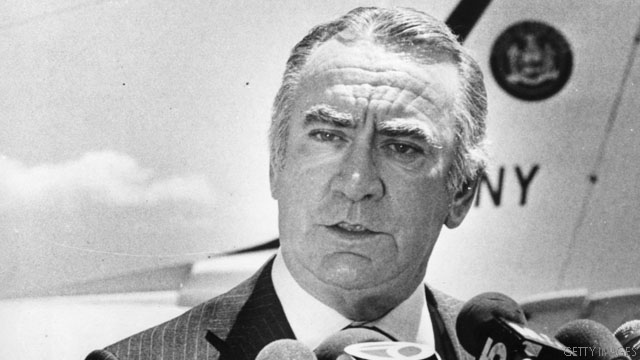 (CNN) - Former New York Gov. Hugh Carey, who led efforts to pull the city of New York back from the brink of bankruptcy in 1975, died Sunday at age 92, Gov. Andrew Cuomo announced.

Carey won the first of his two terms in 1974, after serving seven terms in Congress. By the following spring, the largest U.S. city was facing default, and then-President Gerald Ford refused to intervene.

Carey and other state leaders, public and private, stepped in to set up a state financing company that kept the city afloat, a process that involved layoffs, tax increases and fee hikes.

"He was tough, he was smart, and he was the person our state needed to see us through crisis," Cuomo said in a statement.

Cuomo also cited Carey's fight on behalf of the mentally ill and his ability to solve legislative fights through "charisma, wit, and intellect."

"His administration was one that will be remembered for its remarkable achievements and superlative competence in the operation of government, as well as the governor's energy, enthusiasm and love of New York and for all New Yorkers," Cuomo said.

The Brooklyn native is survived by his five daughters, six sons, 25 grandchildren and six great grand-children.