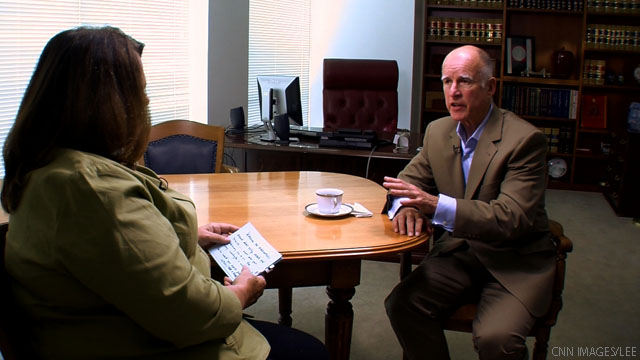 (CNN) - California Gov. Jerry Brown said the United States is at a crossroads and faces a potentially “calamitous” election in 2012.

As demonstrated by the recent debate in Washington over the debt ceiling, the United States will decline if Democrats and Republicans are unable to compromise, Brown said in an interview broadcast Sunday on CNN’s “State of the Union.”

Click to watch video
“I think the only way out of this is going to be a vigorous election, where people lay out the stark alternatives, not muffle it like politicians like to do,” the Democratic governor said.

Although Brown said the country needs a “very clear, decisive election,” both sides of the political aisle are preparing for a tough fight.

“I would say that the Republicans are gearing up to destroy the president, that the president will have to respond in a very powerful way, and the result for the country could be calamitous,” Brown told CNN Chief Political Correspondent Candy Crowley.

Brown, who was elected in 2010 to his second stint as governor, said unyielding ideology like the no-tax stance of many Republicans means compromise is “no longer a viable concept.” That leaves it to the president to provide his plan for the country and run the risk of rejection from the American people, he said.

“Society’s in the mood where it wants a lot of things, but it’s not willing to pay for them,” Brown said.

The former state attorney general and mayor of Oakland recently passed a budget to address a $28 billion budget shortfall in the Golden State. The plan contained severe cuts to education and social programs as well as higher education fees. Brown said the extreme cuts were the result of partisan divides within the state’s government.

“There is no magic bullet other than stimulus, and stimulus has been stigmatized by the Republican leadership,” Brown said. “And they want America to go through this.”