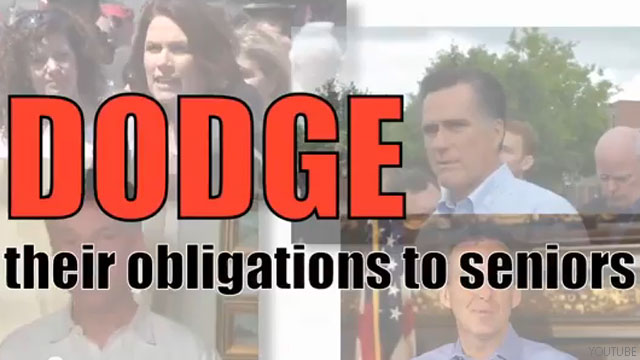 (CNN) - From the first Republican presidential debate in two months, to the Iowa State Fair, to a crucial GOP presidential straw poll in Ames, the Hawkeye State will be firmly in the national political spotlight this week. Now, Democrats are trying to get in on some of the action.

The Democratic National Committee announced Monday morning that it's launching a campaign to define the Republican presidential candidates as extremists trying to please "the far right Tea Party wing of their party and they are following the extreme agenda of Congressional Republicans instead of leading."

As part of the push, the DNC is putting up a web video titled "Extreme Aims: Wrong for Seniors. Wrong for the Middle Class." The party committee says to make its case it will put up a website that profiles the records of each GOP candidate. The DNC also promises an "innovative" Twitter campaign and events on the ground in Iowa throughout the week.

Rep. Debbie Wasserman Schultz, the DNC chair, will hold events in Iowa starting Friday, including a roundtable discussion with Iowa voters Friday morning and a visit to the Iowa State Fair later in the day, when she'll speak from the famous "soapbox." Most of the GOP presidential candidates will also make swings though the state fair, a must-do stop for any White House contender.

The following week President Barack Obama will visit Iowa as part of his Midwest bus tour on jobs. The White House calls it official presidential business, but it's obvious the trip has campaign overtones, as Iowa votes first in the primary and caucus calendar and is a battleground state in the general election. Obama carried the state by 10 points in the 2008 presidential election, but the GOP performed well in last year's contests, winning back the governor's office.