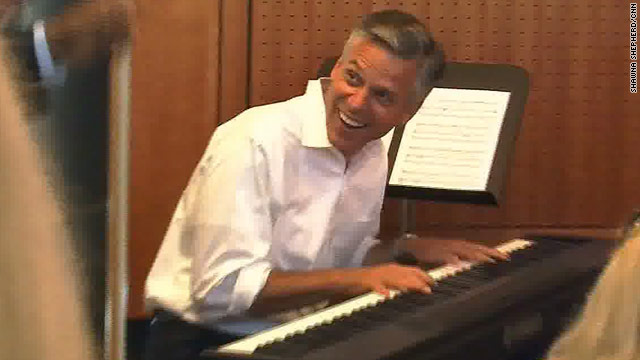 Charleston, South Carolina (CNN) - After taking tough questions on the economy and his conservative credentials in South Carolina, Republican presidential hopeful Jon Huntsman took to the keyboard with a rendition of "Hit the Road Jack" aimed at President Barack Obama, in an attempt to hit a high note with voters in the state.

Click to watch video
If the questions posed at the Sunday night town hall are any indication of what's on the minds of primary voters in the Palmetto State, it's the economy.

Someone in the 200-person audience yelled "amen" when Huntsman, reflecting on the recent U.S. downgrade from Standard & Poor's, declared "we're in a really bad place."

That's how the former CEO and businessman defended his support for the debt-ceiling deal backed by Obama and congressional leaders. Huntsman added, "I thought it was important we not default."

With the submitted questions focusing primarily on the economy, rising freshman Rep. Scott, who served as the moderator, asked Huntsman about his position on civil unions, his support of which puts him to the left of many social conservatives.

However, in his opening remarks he illustrated his pro-life position in personal terms, with his 12-year-old adopted daughter from China, Gracie Mei, by his side. With one arm wrapped around her, he said, "I don't need to tell you that I'm glad that her mom chose life, because she's got something to show for it. And every day I look at her and I think, that's a special human being. Her mom didn't have to do that."

For many people in the audience, this was the first time they came face-to-face with a 2012 White House contender.

One man caught Huntsman outside as the two were walking out. He told him he liked what he heard in the town hall but admitted he didn't like some of Huntsman's positions.

With a smile and a pat on the shoulder, Huntsman quipped, "My wife doesn't like everything either, but what can you do?"