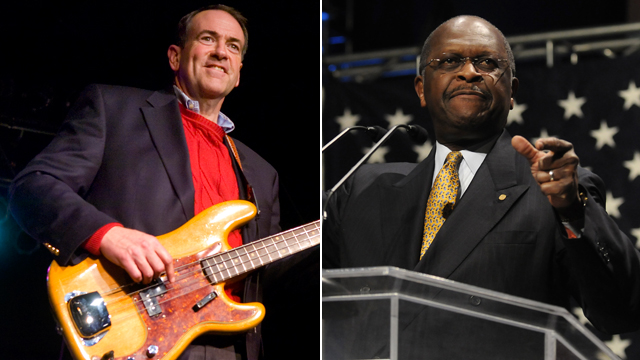 (CNN) – Call it Mike Huckabee's summer tour. The former governor of Arkansas and bass player Mike Huckabee will join businessman and gospel singer Herman Cain on stage at the Iowa straw poll in Ames to "share their musical talents with straw poll attendees," one of many gigs the part-time musician plans to play at the early 2012 presidential contest.

"I am honored to have the Governor join me on stage for this historic event," Cain said in a statement. The duo will perform together at the Friends of Herman Cain tent during festivities leading up to the matchup that tests candidate strength and organization in the first-in-the-nation caucus state.

Huckabee, a 2008 presidential hopeful and winner of the Iowa caucus, placed second in the 2007 Ames contest, a win widely credited as bringing the attention and velocity needed to propel him toward his subsequent victory in Iowa.

And though Huckabee's appearance isn't a formal endorsement of Cain, the candidate is no doubt hoping that some of Huckabee's Iowa fortune will rub off. Cain has been polling in low single digits measuring candidate support since he formally announced his presidential bid in May, but recently won the Western Conservative Summit 2011 Denver Presidential Straw Poll.

Other candidates may be hoping for the same thing. Huckabee will also play with the band The Crickets, featured at former Pennsylvania Sen. Rick Santorum's tent, and with both Sonicflood and The Nadas in former Minnesota Gov. Tim Pawlenty's tent. Michigan Rep. Thaddeus McCotter announced Wednesday that he, too, would jam with the host of "Huckabee."