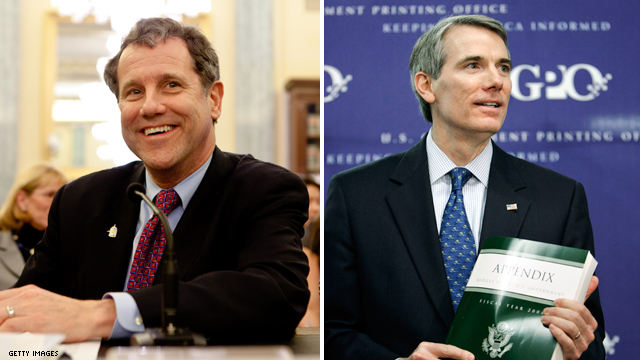 (CNN) - In a show of Washington bipartisanship, Democratic Sen. Sherrod Brown praised fellow Ohio Sen. Rob Portman, a Republican, for being tapped to serve on the Congressional "super committee."

"Minority Leader McConnell was right to select Senator Portman as one of the three Republican Senators for the deficit reduction committee," Brown said in a statement Wednesday. "Rob has shown a willingness to find common ground by looking at both tax reform and spending cuts in order to reduce the deficit."

Portman, a former White House budget director under President George W. Bush, is one of six fiscal conservatives chosen for the 12-member, bi-partisan committee, which has the task of working out $1.5 trillion in deficit reduction, after an initial round of more than $900 billion in spending cuts in the debt ceiling agreement.

The group is required to complete its work by Nov. 23. Congress then has until Dec. 23 to vote on the proposal, with no amendments permitted.

- CNN's Deirdre Walsh and Tom Cohen contributed to this report.