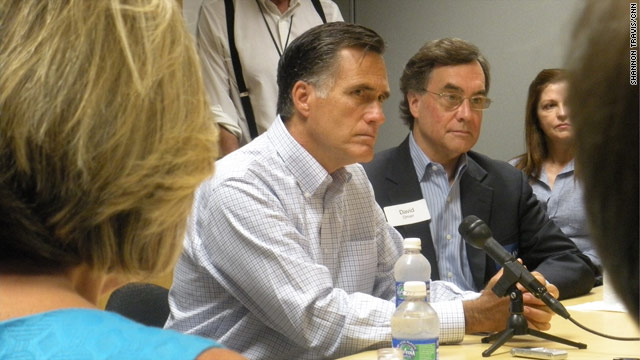 Pella, Iowa (CNN) - The Republican presidential candidate who's been missing from political action recently in Iowa returned here on Wednesday with a fresh prediction: President Obama won't win Iowa in 2012.

And Mitt Romney upped the ante, proclaiming he would win the state's seven electoral votes if he becomes the Republican presidential nominee.

Romney spoke to reporters in Pella, Iowa, after speaking at a company that manufactures agricultural, environmental and industrial equipment. In the back-and-forth with business people, Romney repeated his slams against the Obama administration: decrying its "job-killing" economic policies, saying he believes officials intend to have a government-run health care system, and blasting Democrats as being beholden to special interests like public worker unions.

In his exchange with reporters, Romney mentioned the president's upcoming bus tour.

"I hope that on his bus tour he actually takes the time to get off the bus and sit down with business people...and ask them whether the policies he's put in place over the last two and a half years have helped or hurt enterprise and jobs in America," Romney said.

The candidate then donned the hat of political punditry.

"I think you'll find that on policy after policy, that if he [Obama] does that he'll learn from the American people and from business people just what I do...that the president's policies have made it more difficult for enterprises to grow and thrive at a time when the economy was in trouble. And that's why I think this president is going to have a tough re-election bid."

Romney added: "Let me make this prediction: he won't carry Iowa in November 2012."

In 2008, then-Senator Obama won Iowa, beating GOP presidential nominee Sen. John McCain by nine-points in the state. Obama, then a senator from Illinois, also won Iowa's critical caucuses in January of that year.

Meanwhile, there's a question of whether or not Romney can make good on his prediction: of winning Iowa should he become the nominee.

In the 2008 race, he actively campaigned for a win in the Iowa caucuses - but lost that contest to former Arkansas governor Mike Huckabee.

Currently, Romney has not been aggressively campaigning in Iowa. Wednesday's visit is his first since May and that visit was his first of the 2012 cycle.

Other candidates - such as Minnesota Rep. Michele Bachmann, former Minnesota governor Tim Pawlenty and businessman Herman Cain - have been far more visible and vocal in and around Iowa in the hopes of winning Saturday's crucial Ames Straw Poll. That contest is seen as a barometer of a candidate's organization and popularity.

Various polls in Iowa have recently shown Romney either holding a lead above his fellow contenders or slipping behind them.

Romney was asked about his chances of winning the state, given his lengthy absences in between visits thus far.

Romney added: "I'll be participating in the Iowa caucus process hoping to win the delegates that I'd like to have to win the nomination. And if I'm the nominee, of course I'll be aggressively campaigning – Iowa will be a swing state. I don't think the president will win it. I think I'll win it if I'm the nominee."

Some Iowans have grumbled that Romney is skipping the state thus far.

The candidate was asked if he can win their support for the caucuses, though he's isn't aggressively campaigning for their support in the Ames contest.

"Sure hope so," Romney said. "My view is that what I want to do is go out and talk to Iowans and express my views for how to get the economy going again. And I think the people of Iowa are far less concerned with the process of politics and far more concerned with the future of America."