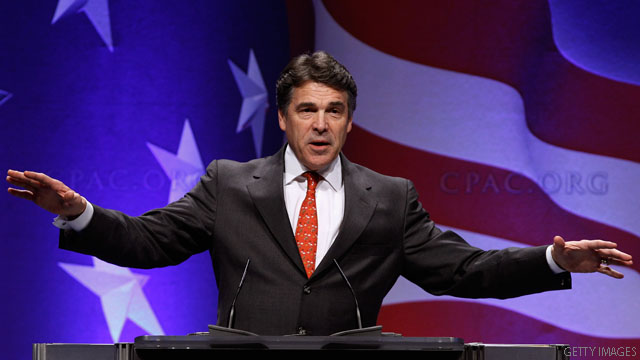 Washington (CNN) - As Rick Perry moves closer and closer to a run for the White House, a new national survey indicates that the longtime Texas governor is close to the top of the pack in the hunt for the Republican presidential nomination.

According to a CNN/ORC International poll, 15 percent of Republicans and independents who lean towards the GOP pick Perry as their first choice for their party's nomination, just two points behind former Massachusetts Gov. Mitt Romney, who's making his second bid for the White House. Romney's two point margin over Perry is within the survey's sampling error.

The poll's Thursday release comes two days before Perry gives a speech at a major conservative gathering in South Carolina where he is expected to announce his run for the White House. Later in the day Perry travels to New Hampshire to meet with GOP lawmakers, activists, and voters. Perry's travels Saturday come as the rest of the political spotlight will be shining on Iowa, for a crucial presidential straw poll in Ames. Perry heads to Iowa Sunday to speak at a Republican party gathering, which means he will visit three of the crucial early voting primary and caucus states this weekend.

The survey indicates that former New York City Mayor Rudy Giuliani, former Alaska Gov. Sarah Palin, and Rep. Ron Paul of Texas, who is making his third bid for the White House, are at 12 percent apiece. While both Giuliani, who ran for the presidency four years ago, and Palin, the Republican vice presidential nominee in 2008, have flirted with bids, neither has taken concrete steps towards launching a campaign.

According to the poll, Rep. Michele Bachmann of Minnesota has the support of seven percent, with former House Speaker Newt Gingrich at five percent, both former Godfather's Pizza CEO and radio talk show host Herman Cain and former Utah Gov. and former U.S. Ambassador to China Jon Huntsman at four percent, former Minnesota Gov. Tim Pawlenty and former Sen. Rick Santorum of Pennsylvania at two percent. Former New Mexico Gov. Gary Johnson and Rep. Thad McCotter of Michigan both register at less than one half of one percent.

If the choices are pared down to exclude Giuliani and Palin, Romney remains at the top of the list, with 23 percent, followed by Perry at 18 percent and Paul at 14 percent. The survey indicates Bachmann at nine percent, Gingrich one point back, Cain and Huntsman at five percent, Pawlenty and Santorum at three percent and Johnson and McCotter both registering at less than one half of one percent.

According to the poll, the GOP candidates and potential candidates match up differently against President Barack Obama in hypothetical 2012 general election showdowns. Giuliani has a 51-45 percent advantage over Obama among registered voters, while Romney matches up evenly against the President - 49 percent for Obama and 48 percent for Romney. But the survey indicates Obama appears to have a slight edge over Bachmann (51-45 percent) and Perry (51-46 percent) and Obama has a lead over Palin (55-41 percent).

The CNN poll was conducted by ORC International on August 5-7, with 1,008 adult Americans questioned by telephone. The survey's overall sampling error is plus or minus three percentage points.

Read an opinion article about Perry's run for the White House here.