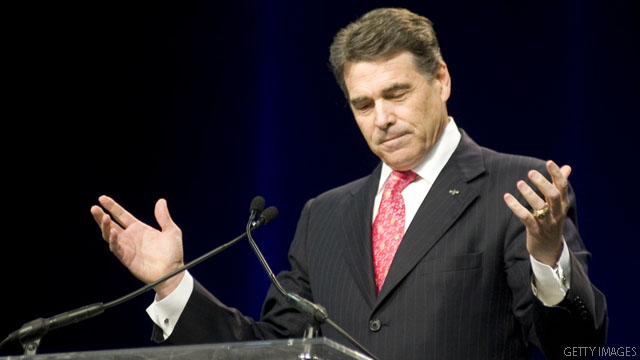 The longest-serving Lone Star governor, who has not officially announced a bid for the White House, said he would not be "this far into the process," unless he wanted to run for president in 2012.

"I mean, you and I having this conversation has answered that question," Perry told Halperin.

He said a discussion with his wife led to his final decision. According to Perry, she said "our country is in trouble, and you need to do your duty."

"A person that I greatly love who I've been either dating or married to for I think 45 years now, made me realize that I couldn't sit on the sidelines if my country's future truly is at stake," Perry said. "I'm very calm in my heart that this is what I'm supposed to be doing."

A new CNN/ORC International poll released Thursday showed 15 percent of Republican and independent voters who lean toward the GOP picked Perry as their choice for the Republican nomination. Perry was just two points behind former Massachusetts Gov. Mitt Romney, considered the frontrunner in the nominating process. Romney's two point advantage over Perry is within the survey's sampling error.

The Texas-native who served as Bush's lieutenant governor, said he spoke to the 43rd president in early July to wish him a happy birthday.

With regards to his potential bid, Perry recalled Bush saying, "'You'll do what's right.' He said you don't want to wake up when you're 70 and go, 'I wish I had tried that. I wish I had done that.'"

Despite his support for the more socially moderate New York City Mayor Rudy Giuliani in the 2008 presidential race, Perry said he would be the most conservative candidate in the race. But the economy, he said, would be issue No. 1.

"So, what's the most important thing that's facing this country? It's getting this economy back. I am a pro-business governor. I will be a pro-business president if this does, in fact, ensue and I'm blessed to be elected president of the United States," Perry said.

And he has boiled his economic plan down to four points: reduce spending, institute a tax structure "that's fair, and as log as you can have it, and still deliver services that the people require," establish a regulatory climate that is "fair, predictable," and have a legal system that doesn't allow for "over-suing."

When asked if any aspect of running for president intimidates him, Perry responded "No."