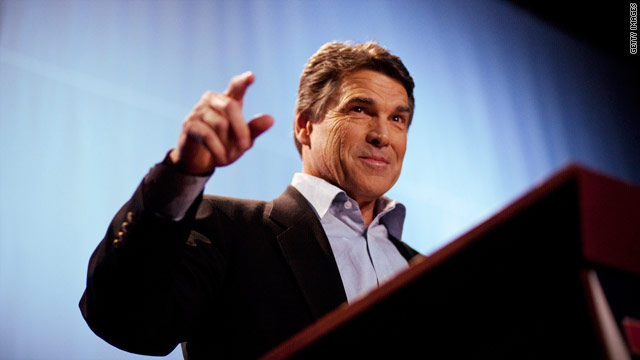 Perry to focus on jobs

(CNN) - Republican Texas Gov. Rick Perry, who's set to announce his presidential bid Saturday, laid out his stance on one of the country's top concerns: job creation.

"This country's begging for someone to lay out a vision of hope–real hope–and get America back working again," Perry said in an interview Thursday with New Hampshire television station WMUR.

Perry touted his 10-year record as the longest-serving governor in Texas, saying the Lone Star State has created more jobs than any other state.

He advocated for what he called "simple but very effective principles" used in Texas of keeping taxes low, maintaining a predictable regulatory climate, and holding a legal system that "doesn't allow for over-suing."

"I'll put that record up against anybody that's running, either on the Republican side or the Democratic side," Perry said.

When asked what made him different from frontrunner Mitt Romney, former governor of Massachusetts, Perry said voters should compare their time as governors.

"If you just want to look at the track record of when Mitt was the governor of Massachusetts versus my years being the governor of Texas, mine doesn't need any propping up," Perry said.

Perry has said since June he was giving serious thought to the idea of running for president.

And while he saw support among those who felt the current 2012 field lacked a strong frontrunner, critics argued Perry may remind too many voters of another Texas governor, former President George W. Bush.

When asked about their differences, Perry said Texans aren't all the same.

"Everybody in Texas gets up every day, and they put either their shoes or their boots on and go to work," Perry said. "We're not a monolithic group, for sure."

Perry did not confirm that he's running for president, but he hinted that he's gearing up for a presidential campaign.

"My hope is that in four years, people can take a look at what we've done in Washington, D.C., and they know that I've made Washington, D.C. less consequential in their lives," Perry said.