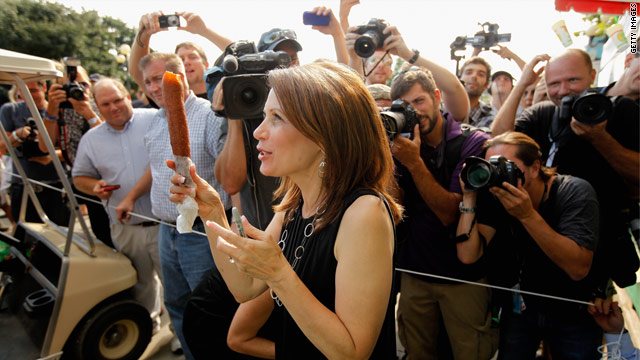 Des Moines, Iowa (CNN) – Minnesota Rep. Michele Bachmann was at the center of an unusual campaign moment on Friday that involved reporters trying to ask her questions - and the Republican presidential candidate essentially being cocooned by a ring of protectors.

The Bachmann campaign insists they were only trying to keep the congresswoman safe and secure.

At issue: a scene that unfolded after the Republican presidential candidate briefly spoke at the Iowa State Fair in Des Moines.

After talking for about three minutes, Bachmann waded into the crowd filled with adoring supporters.

Moments later, as she tried to exit the area back to a waiting drive cart, Bachmann found herself in the middle of a mob of people: among them many supporters and members of the press including this reporter and CNN anchor Don Lemon.

As both CNN staffers tried to question Bachmann, Lemon said he was pushed by two members of Bachmann’s staff. Lemon also said that Marcus Bachmann, the congresswoman’s husband, pushed him.

“She came out, after speaking for just a couple minutes,” Lemon said. “There were other reporters and cameras there. And I asked her very respectful questions: ‘How do you think you did in the debate last night?’ and ‘How do you think you’re going to end up in the Ames Straw Poll?’ And her two campaign aides started elbowing me.”

“It was just, I don’t know, why they would choose to do that. We weren’t asking any ‘gotcha’ questions,” Lemon added.

It’s typical for presidential candidates, especially ones as popular as Bachmann, to wind up in a crush of supporters and reporters at campaign events. But Friday’s episode was unusual.

Stewart repeated that, “Our number one priority is the safety and protection of Michele Bachmann.”

“It was just too crowded,” Stewart continued. “We were just trying to get her out in order for her to go to other events at the fair and that’s what we were doing.”