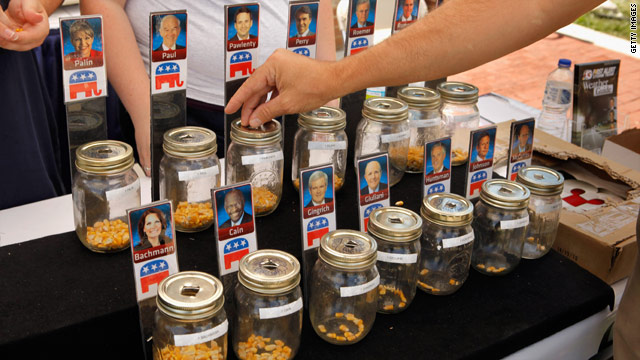 Des Moines, Iowa (CNN) - Good Morning from the Iowa State Fair, where you can get 59 types of food on a stick. But presidential politics is also being served up Friday at this famous fair.

The sun is rising here at the fairgrounds, which will be smack dab in the middle of the race for the White House. All the action was about 30 miles north of here in Ames Thursday night, for a very contentious Republican presidential debate.

But Friday seven GOP White House hopefuls make the rounds at the annual state fair, which is a picture perfect example of retail politics. From taking questions directly from Iowa voters at the famous Soap Box, to walking the fair grounds and shaking hands, to eating fried Twinkies and any kind of meat on a stick, the Iowa State Fair is a top item on the to-do list for presidential candidates.

Former Massachusetts Gov. Mitt Romney and former Utah Gov. and former U.S. Ambassador to China Jon Huntsman made the rounds at the state fair Thursday before joining the fun at the debate. Friday they're back on the campaign trail in New Hampshire, which votes second in the caucus and primary calendar following Iowa.

Talking about the state fair, we're on the lookout for Sarah Palin. The former Alaska governor's "One Nation" bus tour is supposed to roll through possibly Friday. The 2008 GOP vice presidential nominee says she'll decide on whether she'll make a bid for the White House sometime next month.

Saturday, the action here in Iowa shifts back to Ames, for the straw poll. We'll pull up stakes tonight and drive the CNN Election Express north to Ames.