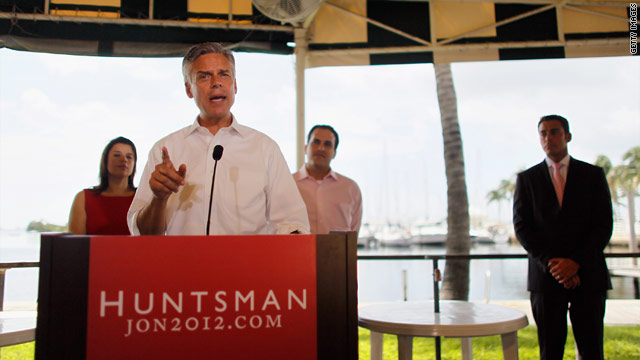 Huntsman drills down on New Hampshire

Huntsman has pinned his hopes on winning the fiscally conservative first-in-the-nation primary state and has chosen to bypass the Iowa caucuses, which tend to reward socially conservative candidates.

The Republican face-off came two days before the closely-watched Ames Straw Poll, which Huntsman will also skip. While many of his competitors greeted voters at the Iowa State Fair, Huntsman told reporters Friday it was good to be back up north after a debate that was "tilted in terms of time and questions" toward the Iowa contest.

"I'm delighted to be back in New Hampshire," he said. "And we're going to focus laser-like on New Hampshire for the next little while."

The candidate continues to struggle in the polls and has planned a raft of events in the state, including five stops on Saturday alone.

The former ambassador to China was also asked about Texas Gov. Rick Perry, who plans to announce his candidacy in South Carolina Saturday before attending an evening house party in Greenland, New Hampshire.

"He brings some real successes to the race as governor," Huntsman said. "Rick has done a nice job, and I think he'll be a forceful addition to the race."