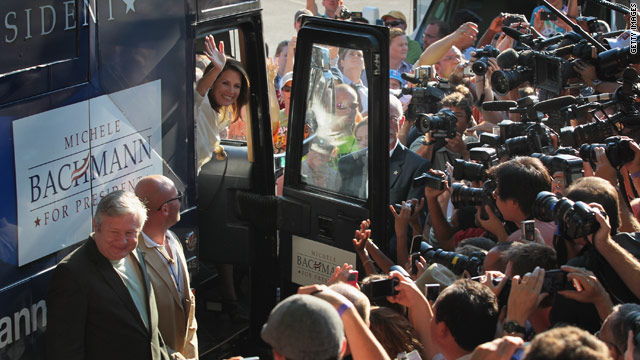 Bachmann talks like a front-runner: ‘It’s on to all 50 states’

Ames, Iowa (CNN) – Newly minted Ames Straw Poll winner Michele Bachmann is already sounding like a front-runner – saying her win is the “first step” on the road to the White House.

And though the GOP congresswoman for Minnesota has not yet won any caucus or primary, she said she’s ready to head to all 50 states. The Ames contest is a nonbinding contest that generates tremendous buzz, but does not award delegates toward winning the GOP presidential nomination.

“Thank you everyone. We did this together,” Bachmann told a crush of supporters just a short while after narrowly clinching victory in the critical Iowa contest. “What we saw happen today, is this is the very first step toward taking the White House in 2012.

“This was a wonderful down payment on taking the country back. Now it’s on to all 50 states,” Bachmann added.

The congresswoman’s husband, Marcus Bachmann, was asked how he reacted to his wife’s win.

“We held each other for quite awhile,” he said.

Moments after – as Bachmann hurried off with handlers to a media appearance - CNN asked how she felt about her win.