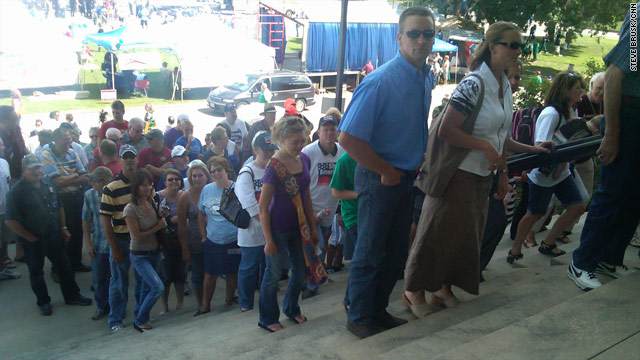 The scene at the Ames Straw Poll in Iowa contest is chaotic but apparently not confusing to Iowans determined to cast votes for their candidate, socialize with fellow voters and indulge in free food and entertainment.

If crowd size were any measure of who might win the contest, Republican presidential Michele Bachmann could have some reassurance. The line to get into her enclosed tent snaked so far back that a reporter counted off 200 steps from the back to the front. It's unclear how long the actual wait in line would be for supporters.

"We're prepared to wait two hours," JoAnn Korpi said from the end of the Bachmann tent-entrance line. She was there with husband Joe. Both had just voted in the straw poll for the Minnesota congresswoman.

“Because she’s strong, she’s assertive, she’s not afraid, she’s clear, concise, she’s not going to give up without a fight to stand on principled values and morals,” the wife said. “And because she has balls.”

At Tim Pawlenty's open tent, the crowd size was smaller but no less enthusiastic. The former Minnesota governor thanked his wife, Mary, and introduced a special musical guest: Former Arkansas Gov. Mike Huckabee. With a guitar strapped across his chest, Huckabee performed a brief number.

Huckabee also performed briefly at Rick Santorum’s tent. After being introduced by the former Pennsylvania senator, Huckabee said, “Thanks to Rick for the clarity of his convictions. I'm not using this forum to endorse a specific candidate. But I'm endorsing the principles these candidates stand for.”

At Herman Cain’s tent, the businessman led supporters in a moment of prayer. Huckabee stopped by Cain’s tent as well.

Meanwhile, one odd moment showed just how unpredictable things may get.

At one point, the setup area for GOP presidential candidate Thad McCotter contained two tables splayed with campaign signs – but virtually no people. There was only a small crowd in front of a McCotter stage in the distance.

A man walked by and openly asked, “Who is Thad McCotter?”

Not receiving an answer, the man – who later identified himself as LeMar Koethe – turned to a man sitting in a McCotter truck. The man was handing out popsicles to passersby on behalf of the Michigan congressman.

“We got to find out who this guy is. Shouldn’t he be by his truck?” Koethe asked the man in the truck.
The truck passenger, later identified as Larry Rokus, said: “Honestly, this is the first time I’ve heard of him.