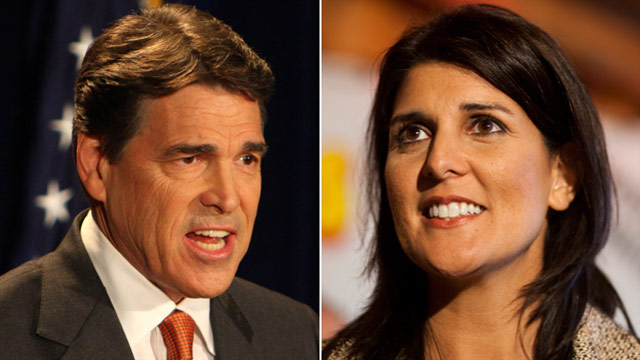 Gov. Perry a ‘superstar’ in eyes of Gov. Haley

Charleston, South Carolina - At a conservative gathering in South Carolina, Gov. Nikki Haley called Gov. Rick Perry a “superstar” and said his move to announce his run for president in her state, while other GOP contenders competed in the Ames Iowa straw poll, was brilliant.

“It just let’s us know that it’s game on for all the candidates and I love that,” Haley told reporters, referring to Perry’s announcement at the RedState Gathering where she spoke earlier.

She was effusive in her comments about the latest GOP presidential contender but fell short of endorsing the candidate.

“He comes from a great state, he has a great hope for America,” Haley said. “He wants to make the people of our country feel good again and deliver results.”

The first-term governor said that she would throw her support behind a candidate before the state’s primary that has a stellar 20-year record of selecting the eventual presidential nominee.

Haley argued her unexpected gubernatorial win is a lesson for the candidates who need to break the momentum of well-financed frontrunner Massachusetts Gov. Mitt Romney in order to win the party’s nomination.

“No one thought I could win but what this group and RedState, and certain people around the state, they thought I should win and they’re the ones that lifted me up and I’m proof when you take the person that should win, that person will spend the rest of her time trying to prove to everyone that they made the right decision, and they’ll do it with their fight and they’ll do it with results,” Haley said.