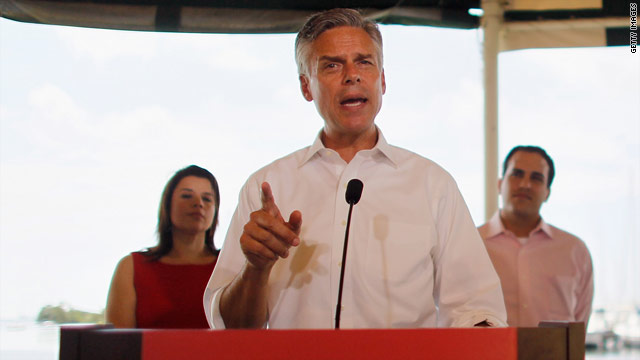 Dover, New Hampshire (CNN) - Jon Huntsman predicted that Michele Bachmann would win Saturday's straw poll in Iowa, an organizing contest he chose to skip to focus his campaign on New Hampshire instead.

Huntsman told CNN he thinks Bachmann will win, Ron Paul will place second and Tim Pawlenty will come in third.

The former Utah governor, who most recently served as U.S. ambassador to China, was campaigning in New Hampshire as most of his rivals for the nomination were trying to persuade Iowans to support them in the straw poll.

Other candidates not participating in the straw poll are former Massachusetts Gov. Mitt Romney, Texas Gov. Rick Perry and former House Speaker Newt Gingrich. Romney had a campaign stop in New Hampshire Friday night and Perry had an event planned Saturday evening in the state.