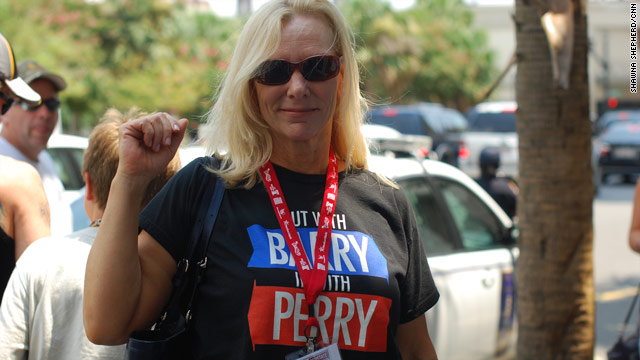 Charleston, South Carolina (CNN) - Vowing to bring his own brand of Lone Star conservatism to Washington, Texas Governor Rick Perry declared his candidacy for president in a raucous speech in South Carolina Saturday.

“It is time to get America working again,” Perry said in the speech, previewing his campaign’s focus on the economy.

In reference to the recent downgrade of the U.S. credit rating, Perry jabbed the president.

Perry’s address at the Red State Gathering, a conference for conservative activists in Charleston, ended months of speculation about his presidential ambitions.

The longest-serving governor in Texas history also dished out red meat to conservatives with promises to reduce the size of the federal government and to end the president’s national health care law.

"I'll work every day to make Washington, DC as inconsequential in your life as I can," Perry said.

The Texas governor agreed to speak at the event months ago when he said he was not considering a campaign.

But in the last two months, Perry told reporters he was beginning to feel “called” to run for the White House.

With the rest of the Republican field vying for votes at the Ames straw poll in Iowa, Perry and his strategists determined an announcement at the Red State event would steal some of the political spotlight.

South Carolina Gov. Nikki Haley, another rising conservative in the Republican Party, praised the maneuver after her remarks at the conference.

“I think it's entirely brilliant. I think to turn around and do this the same day that you've got an Ames Iowa poll really just lets us know that it's game-on time for all the candidates and I love that,“ Haley told reporters at the conference.

Democratic activists protested Perry’s speech outside the event. Dressed as confederate Civil War soldiers, the demonstrators mocked Perry’s comments in 2009 when he suggested at a tea party rally he would consider seceding from the United States.

Perry’s aides have repeatedly claimed the governor was only kidding when he made the remarks.

But the GOP contender appeared to address criticism of those comments in his speech.

The Texas governor is widely viewed as a potential political threat to GOP front-runner Mitt Romney. A recent CNN/ORC poll showed Perry just two points behind Romney among Republican voters in the battle for their party’s presidential nomination.

Perry’s speech received a warm and sometimes rowdy response from the packed audience of conservatives.

“This is the speech conservatives have been waiting for,” Sklaroff said.

“He’s a conservative, a fiscal conservative. And that’s what’s needed to get the country back on track,” another audience member, Caroline Durand, said.

If he makes it to the White House, Perry would become the second GOP Texas governor in a row to do so.

But there was no mention of his predecessor in Austin, George W. Bush, in Perry’s speech.