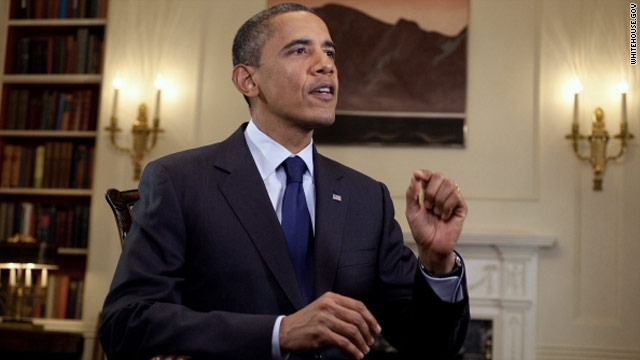 “There’s nothing wrong with our country,” he declared.

“There is something wrong with our politics.”

Citing “brinkmanship” as an obstacle to growing the economy and creating jobs, the president criticized “the idea that making it through the next election is more important than making things right.”

“That’s what’s holding us back,” he said. “Some in Congress would rather see their opponents lose than see America win.”

Listing ways Congress can get the economy on track, the president proposed extending the payroll tax cut, cutting “red tape” in the patent process so that entrepreneurs can get ideas to the market more quickly, and finishing trade deals to boost the sale of American-made goods around the globe.

Obama owned his own frustration and called on those feeling the same to hold their elected officials accountable.

“I don’t think it’s too much for you to expect that the people you send to this town start delivering,” he reasoned.

“If you agree with me-whether you’re a Democrat or a Republican or not much of a fan of either-let them know.”

Obama admitted “we’ve still got a long way to go to get where we need to be” because “we didn’t get into this mess overnight and it’s going to take time to get out of it.”

But for the president, that’s “no excuse” for inaction.

“When we come together and find common ground, there’s no stopping this country.”

And though Pennsylvania Sen. Pat Toomey agreed that the president “inherited a weak economy” in the Republican weekly address, he also accused Obama of making the economy worse.

“His administration told us passing [the] stimulus bill would keep unemployment below 8 percent. Instead, since the stimulus was enacted…the unemployment rate has averaged over 9 percent,” the freshman senator said.

“Clearly, the policies of this administration are not working.”

Toomey blamed the troubled economy on “job-killing regulations” enacted by agencies like the Food and Drug Administration, National Labor Relations Board, and Federal Communications Commission.

“With so many burdens and the threat of new obstacles in the future, it’s not hard to understand why job creators are leery of assuming the risk and costs that come with starting a new business or expanding,” he said.

While Toomey, who was recently appointed to the Joint Select Committee on Deficit Reduction - a “super committee” tasked with recommending ways to reduce the deficit by the year’s end - insisted “government has to get out of the way,” he also admitted some regulations are needed to “keep us safe.”

Calling for necessary regulations to be “enacted in a thoughtful manner,” Toomey sought to eliminate those that are “most harmful” such as health care reform.

He pledged to use his “super committee” service to develop a proposal that will reduce government spending and “help to create an environment where entrepreneurs can thrive.

“Our strength doesn’t come from a bigger government controlling our economy,” Toomey said. “It comes from a free enterprise system and the hard-working, honest citizens who make it run.”