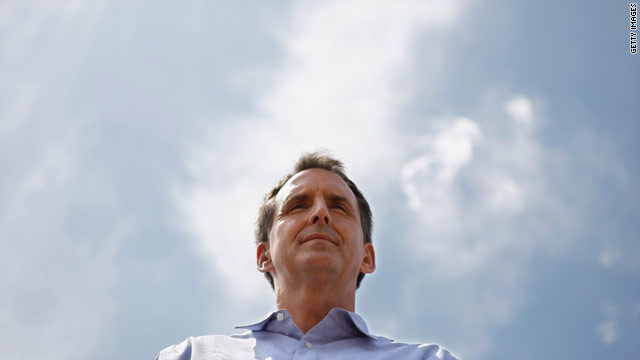 Ames, Iowa (CNN) - Minnesota Rep. Michele Bachmann’s narrow victory at the Ames Straw Poll on Saturday dealt a serious blow to the presidential hopes of former Minnesota Gov. Tim Pawlenty, who now must rethink his candidacy after staking much of his campaign on a strong performance in Iowa.

Pawlenty and his advisers had hoped that a first or second-place finish would validate his Iowa strategy and give his flagging campaign a much-needed boost.

But he saw his total of 2,293 voters more than doubled by each of the two top finishers, Bachmann and Texas Rep. Ron Paul.

In a statement released through his campaign, Pawlenty put on a brave face.

“Congratulations to Congresswoman Michele Bachmann for her victory in today's straw poll,” he said. “We made progress in moving from the back of the pack into a competitive position for the caucuses, but we have a lot more work to do. This is a long process to restore America - we are just beginning and I'm looking forward to a great campaign.”

Pawlenty promised earlier in the week at a breakfast with reporters in Des Moines that he would do “very well” and said a dismal finish would force him to “retrench in some fashion.”

“But I don’t think that’s going to happen,” he added.

His campaign had been working to lower straw poll expectations for weeks, saying that the candidate only needed to outperform his relatively low standing in the polls. Pawlenty has remained in single digits since joining the race, while the outspoken Bachmann quickly rocketed to the front of polls after announcing her campaign in June.

Privately, though, his team was rooting for a win or close second place finish at Ames to reassure supporters and donors, as well as the media, that his campaign was not stalled.

Immediately after the results were announced by Iowa GOP Chairman Matthew Strawn, there were murmurs among top Republicans that Pawlenty should consider leaving the presidential race.

“Pawlenty now goes through the stages of death in the next 24 hours,” said Republican strategist Alex Castellanos. “Denial. Can he stay in the race like John McCain? Anger. Pawlenty people start throwing people under the bus and start pointing fingers. And then reality. Can they raise the money to stay in this thing? And the answer is probably no. So what is left for Pawlenty? A graceful exit.”

Other Republicans were slightly more charitable.

“He has got to reassess whether he has got a viable campaign,” said Gentry Collins, a veteran Republican operative in Iowa. “The straw poll has not always picked the nominee, but it has been a winnowing event. And it has been a good indicator of how much energy we have in the grassroots of our party.”

Former Arkansas Gov. Mike Huckabee, who beat expectations to finish second in the 2007 straw poll, told CNN after the vote that Pawlenty should remain in the race

“It’s a long process where we are months away from the caucuses,” Huckabee said. “So what you don’t want to do is to have people who drop out and then find out that maybe a candidate stumbles all over himself, and the field in front of him is clear.”

The straw poll vote is hardly decisive: Historically, only three of the five straw poll winners have gone on to win the caucuses.

But Collins noted that big-name Republicans have, in the past, run out of gas at Ames and abandoned the race after a poor showing.

Tennessee Sen. Lamar Alexander and former Vice President Dan Quayle dropped out of the race after coming up short in the 1999 straw poll. In 2007, then-Kansas Sen. Sam Brownback and former Wisconsin Gov. Tommy Thompson also quit the race after Ames.

Pawlenty had hoped to avoid a similar fate. He had honed his retail skills over the last month with a marathon campaign schedule across the state, drawing respectable crowds and sharpening his attacks against Bachmann.

But his low-key manner, sizeable field staff and team of experienced political operatives were outmatched by Bachmann’s natural appeal to the grassroots conservatives who typically participate in straw polls.

The line outside the Bachmann campaign tent, set up just outside the Iowa State University basketball arena where the voting took place, snaked for hundreds of yards through the parking lot. Some supporters told CNN they waited up to 45 minutes for food at the Bachmann tent.

She also delivered a fiery stump speech inside the arena where the vote was held, reminding party activists of her Iowa roots and deeply held socially conservative beliefs.

Like the other candidates, Pawlenty also brought out thousands of supporters, providing them with free T-shirts, ice cream, barbecue and free music.

But the giveaways were not enough to propel him past Bachmann or Paul.

“The Pawlenty campaign is going to have to reassess their campaign approach,” said Tim Albrecht, another Hawkeye State Republican strategist. “That is the most diplomatic way I can say it.”